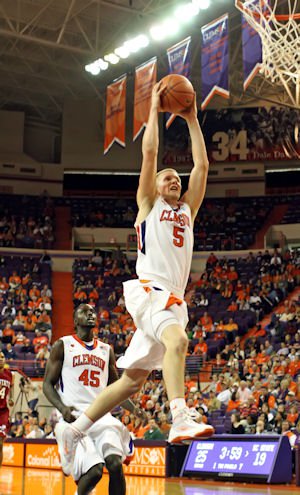 Clemson is one of 19 schools nationally to play in the NCAA Tournament each of the last four years.

*Clemson’s ends its season with a 22-12 record overall, the program’s fifth straight season of at least 20 wins, the longest streak in program history. The 22 wins rank in a tie for eighth best in school history.

*Clemson reached the NCAA Tournament for the fourth straight year, a first in Clemson history. Clemson and Duke are the only two ACC schools to reach the NCAA Tournament each of the last four years. Seniors Demontez Stitt, Jerai Grant, Zavier Anderson and Jonah Baize were common players on all four teams and they were a big reason Clemson won 90 games over the last four years.

•Clemson is one of 19 schools nationally to play in the NCAA Tournament each of the last four years.

•Clemson had a 9-7 record in ACC regular season play, a fourth straight winning season in ACC play, a first in Clemson history. Clemson and Duke are the only two ACC schools with a winning record in league play each of the last four years.

*Clemson made 21-26 free throws against West Virginia in the NCAA Tournament and finished the year 493-703 from the foul line, a .701 free throw percentage, best for the Clemson program since the 2000-01 team made .702 for the course of the season. It is just the second time in the last 24 years that Clemson has shot at least 70 percent from the foul line for the year.

•All five Clemson starters shot at least 70 percent from the free throw line, the first time that has happened since the 1986-87 season.

•Clemson shot .747 from the foul line in ACC regular season play, third best in Clemson history and the best since the 1973-74 team shot .753 in league play.

•Clemson had a .402 field goal percentage defense this year, third best in Clemson history and the best since the 1958-59 team allowed a .371 figure.

•Clemson’s victory over UAB was the program’s first in an NCÅÅ Tournament game since 1997.

•Clemson ranked 23rd in the nation, and first in the ACC in scoring defense (through games of March 20). The Tigers were 16-1 this year when holding the opposition to 60 points or less. Clemson allowed just 61.4 points per game, the fifth best scoring defense by an ACC team since the shot clock era began in 1985-86.

*Brad Brownell won .647 of his games in his first year, the best winning percentage by a Clemson first-year head coach since the 1920-21 season when Larry Conover had a 10-5 record for a .667 record in his first year.

*Brownell was the only first-year coach to win an NCAA Tournament game this year. He was one of just four first-year coaches to take his team to the NCAA Tournament. The others were Steve Lavin of  St. John’s,   Greg Lansing of Indiana State and B.J. Hill of Colorado. There were 54 coaches in their first year with a program this year across the nation.

•The 22 wins recorded by Brownell were the most by a first-year Clemson head coach. The previous record was 20 by Larry Shyatt in 1998-99. Clemson won nine ACC games and that was four more than any other Clemson first-year head coach in history.

•Brownell’s nine league wins were the third most in ACC history for a coach in his first year with an ACC program.

•Brownell has now won at least 20 games in each of his last six years as a head coach and in seven of his nine years at the Division I level.

•Brownell has coached at three different schools as a head coach and has taken each of the three (UNC-Wilmington, Wright State and Clemson) to the NCAA Tournament in his first year at each school.

•Clemson defeated Boston College in the first round of the ACC Tournament this year. Brownell is now 9-0 in his career in first round conference tournament games.

•Through games of March 20, Brownell’s 22 victories were the third best total by a first-year Division I head coach in 2010-11. Tim Floyd of UTEP had 24 and Tim Cluess of Iona had 23 and his team was still playing in the CIT.

*Young will enter his senior year with 170 career three-point goals, seventh on the Clemson career list. He went ahead of Chris Whitney (167) today.

•Stitt was named first-team All-ACC Tournament after scoring 45 points in the two games. He scored at least 20 points in each game, the first time since Chris Whitney in 1993 to have consecutive 20 point games in the ACC Tournament. He was also third-team All-ACC for the regular season.

*Jerai Grant shot 15-25 from the field in the NCAA Tournament and was Clemson’s top scorer in the two games with 35 points. He finished his Clemson career making 326-555 field goal attempts for a .5874 field goal percentage, fifth best in school history among players with at least 200 field goals. He is also sixth in career blocked shots (197) and 25th in rebounds (541). Grant was named first-team All-ACC on defense for 2010-11.

*Grant ends his career with 88 career victories, fourth in school history and Stitt played in 85, tied for fifth best in Clemson history.