Daniel Gossett
So. RH Pitcher
#23 6-0, 180
Lyman, SC
View Full Profile took a deep breath, gave a megawatt smile to the assembled media in Clemson’s dugout and announced that the longest workday of his baseball career had taken a toll.

Gossett gave up just five hits – two in the ninth inning that had runners at second and third with two out – and struck out three while walking none. In all, he threw 120 pitches.

“It felt good,” he said. “The defense was outstanding all night. We came in and put some runs on the board and that was awesome. It was just keeping a good mix of pitches. It is a confidence boost, something to put under your belt. But you have to keep working – you can’t take a game like this and coast the rest of the year.”

The sophomore out of Byrnes High School said he got a bit of a scare when he thought pitching coach Dan Pepicelli was going to send out another pitcher to pitch the ninth.

“I actually saw him go over to Coach Leggett, because Coach Leggett called him over,” Gossett said. “He was talking about putting in Kevin Bradley 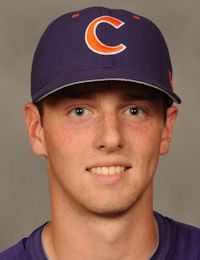 Kevin Bradley
Fr. Infielder
#37 6-1, 200
Pennington, NJ
View Full Profile to catch, and my heart started beating, and I was like, ‘No. Just no.’ I was ready to go out there and argue to get to pitch the ninth.”

He said that Friday’s game wasn’t even the best he has pitched this season.

“No. There is no way. Not taking anything away from the Duke hitters, but I wasn’t locating my slider very well,” Gossett said. “My offspeed was hit and miss, but I was able to keep a good plan with my fastball and stay ahead in the count.”

The Tigers took the early lead on the Brittle hit in the fourth inning. In the fifth inning, Steve Wilkerson

The Tigers tacked on three runs on three hits and three Duke errors in the sixth inning. Brittle hit a one-out single down the right-field line and advanced to second on a Duke error. Tyler Slaton 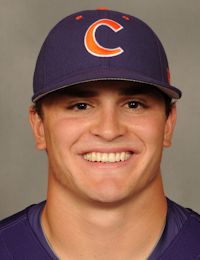 Jay Baum
So. Infielder
#13 6-0, 190
Alpharetta, GA
View Full Profile hit a chopper to third-baseman Jordan Betts. Betts booted the grounder as Brittle scored, then Betts’ throw to first was errant, allowing Slaton to score. Steven Duggar followed with a single through the right side to score Baum.

In the seventh inning, McGibbon laced a two-out double down the right-field line and scored on Tyler Krieger

Betts led off the top of the eighth inning with a double to left field, then Matt Berezo reached on a bunt single. Both runners moved up a base on Mark Lumpa’s sacrifice bunt, then Ryan Munger flied out to shallow center for out #2. Kenny Koplove lined an 0-2 pitch headed for centerfield, but Gossett snagged the liner for the inning-ending out.

Brittle led off the bottom of the eighth inning with a single to left-center and stole second. Two batters later, Baum reached with one out on an error by Koplove at short, then pinch-hitter Mike Triller 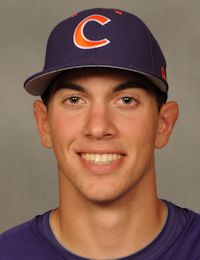 Clemson and Duke will conclude the three-game series with a doubleheader on Saturday at 12:30 PM.