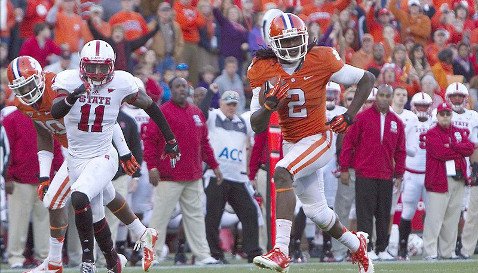 CLEMSON – Another game and records continued to fall in Death Valley.

Clemson set or tied numerous program records as a sun-splashed afternoon turned into a brisk Saturday evening, leading to a 62-48 victory over N.C. State in a game that saw both teams run up and down the field in something resembling a track meet with pads and helmets.

The good news is that many of the records were on the offensive side of the ball and the win gave the Tigers a 10-1 record, the first time the Tigers have earned 10 wins in a regular season since 1981. The bad news – Clemson’s defense, especially the pass defense, looked brutal enough to allow the Pack to set several offensive records of their own.

Special teams were also the culprit – State’s Tobias Palmer had eight returns for 277 yards as part of a day that saw him gain 496 all-purpose yards.

However it ended, the Tigers will take the win and await arch-rival South Carolina next weekend in a game that will probably be the first time the two programs have both been ranked in the top ten.

The Tigers took the opening kickoff and got on the board first with a 46-yard field goal from Chandler Catanzaro for a quick 3-0 lead. The Tiger defense held N.C. State to a three-and-out on the Wolfpack’s opening possession, and the Tigers didn’t waste any time in getting back on the scoreboard.

Clemson took over on its own 34-yard line, and took nine plays to cover the 66 yards, capping the drive with a four-yard run by Boyd - who carried it two times for 16 yards on the drive – and Clemson led 10-0

Just over five minutes into the game.

Clemson added a 43-yard Catanzaro field goal to go up 13-0, but N.C. State answered on its next play from scrimmage when defensive back Garry Peters let receiver Tobias Palmer get behind him and Pack quarterback Mike Glennon made the Tigers pay as he Palmer for a 77-yard touchdown.

Clemson went three-and-out on the ensuing drive, and again it took N.C. State just one play to answer as Glennon again hit Palmer – this time over Bashaud Breeland – for a 49-yard scoring pass and the Pack led 14-13 a little over midway through the fourth quarter.

Clemson was again forced to punt, and N.C. State again torched Clemson’s vulnerable secondary when Glennon capped a nine play, 81-yard drive with a 19-yard scoring pass to Rashard Smith and the Pack led 21-13 late in the first quarter.

N.C. State added a field goal to make it 24-13, and with their backs against the wall the Clemson offense finally got back in gear and scored a touchdown when Boyd hit tight end Brandon Ford from seven yards out. The Tigers went for the two-point conversion, but Boyd’s pass to Ford fell incomplete and the Pack led 24-19 at the 12:52 mark of the second quarter.

A long return set N.C. State up at midfield, and three plays saw the Pack face a 4th-and-1 at the Clemson 41-yard line. The long handoff was stuffed by Josh Watson, and it took the Tigers just four plays to re-take the lead when Boyd hit a wide-open Watkins on a screen pass and Sammy took it 27 yards for the touchdown. Clemson again went for the conversion, and this time Boyd’s pass to Ford was on target and Clemson led 27-24.

Clemson forced a Pack punt on one possession and got an interception off of Glennon in the end zone on another drive, and Nuk Hopkins finally introduced himself to the Pack with two receptions. The first turned into a first down, and the second turned into a 62-yard touchdown reception that made him the all-time leading receiver in program history and the Tigers led 34-24.

Malliciah Goodman sacked Glennon on the Pack’s next play from scrimmage, and Corey Crawford recovered the fumble, giving the Tigers the ball at N.C. State’s 32-yard line with the just over two minutes remaining.

The Tigers forced an N.C. State punt to open the second half, and the Tigers took all of four plays to score, the fourth play a 40-yard pitch-and-catch from Boyd to Martavis Bryant that put Clemson up 48-24 early in the second half.

N.C. State again drove into Clemson territory, but a third down run was stuffed and Glennon’s fourth down pass was batted down and the Tigers took over on downs. This time, it took Clemson 10 plays to drive the 74 yards, but Boyd walked into the end zone from nine yards out and the Tigers led 55-24. The touchdown gave Boyd seven touchdowns on the day – four through the air and three on the ground.

Clemson’s kickoff coverage failed again on the ensuing kickoff as Palmer returned it 81 yards to the Clemson 16 yard line, and the Pack needed exactly one play to score as Shadrach Thornton blew up the middle for the quick strike and Clemson’s lead was 55-31.

Two shorts runs and a personal foul penalty pinned the Tigers deep in their own territory, and Boyd’s third down pass was intercepted by State and returned to the Clemson six yard line, and once again it took the Pack just one play to score as Glennon threw a floater to Carter for the touchdown.

Clemson’s next possession saw Boyd hit Ford on a quick slant, and Ford raced almost untouched into the end zone to complete a 69-yard scoring play that made it an unbelievable 62-38 late in the third quarter. Of course, the Pack and Palmer returned the kickoff to near midfield and then Glennon hit a wide-open Palmer to complete a 29-yard play and the Tigers led 62-45 with 14:20 remaining in the game.

Clemson’s next foray into Pack territory when Boyd’s third down pass to Hopkins fell incomplete at the goal line – it appeared as through interference could have been called – forcing a punt. The Pack took over and drove down to the Clemson 23-yard line where they hit a 40-yard field goal that made it 62-48 with 7:35 remaining.

Clemson then managed to run out the clock, eating up the last 7:35 of the game, falling just two yards shy of the program record of 756 yards of total offense. The Tigers also ran a program record 102 plays.

Clemson returns to action next week, hosting the Gamecocks at 7 p.m.