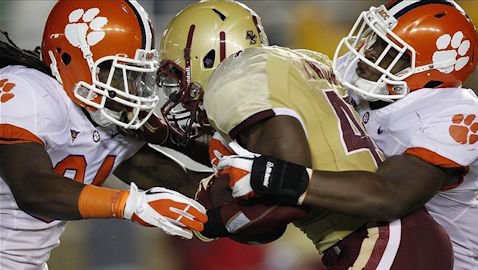 CHESTNUT HILL, MA – Clemson’s offense is in many ways a finished product, and that was proven Saturday as the Tigers rolled up 576 yards and 45 points on Boston College.

However, the much-maligned defense shut down the Eagle running game and made several big stops in the second half, growing up a little itself, as the No. 17 Tigers avoided a post-FSU letdown by defeating Boston College 45-31 at Alumni Stadium Saturday afternoon, improving to 4-1 (1-1 ACC) on the season.

“It feels really good to get a W and get back on track,” Clemson head coach Dabo Swinney

Dabo Swinney
Head Coach
View Full Profile said. “To be a good team, we have to win on the road and this was a difficult challenge for us. Obviously, this has been a tough place for Clemson to win, this is only our second win here.”

Clemson’s defense gave up 21 points in a frantic first half, but settled down in the second half, bolstered by the move of Garry Peters

Garry Peters
RS So. Defensive Back
#26 6-0, 195
Conyers, GA
View Full Profile into the starting lineup at corner after halftime.

Clemson had a three-and-out on the game’s first possession, and Boston College took its first possession 84 yards, taking a 7-0 lead on a 30-yard touchdown run by Andre Williams. Clemson answered on a 28-yard field goal by Chandler Catanzaro

Chandler Catanzaro
RS Jr. Punter / Kicker
#39 6-2, 195
Greenville, SC
View Full Profile – his 16th consecutive dating back to last season – and then took the lead one drive later on a six-yard keeper by Boyd.

The Tigers extended the lead to 17-7 when Boyd hit tight end Sam Cooper from 15 yards out on the first play of the second quarter, but Boston College got touchdown passes from Chase Rettig on its next two possessions to take a 21-17 lead with two minutes remaining in the half.

Brandon Ford
Gr. Tight End
#80 6-4, 240
Wando, SC
View Full Profile from four yards out with just 23 seconds remaining in the half, and the Tigers led 24-21 at the intermission.

The Clemson defense held Boston College throughout much of the third quarter, and Clemson scored on an electric 16-yard run by Rod McDowell and used a one-yard dive from Ellington to extend the lead to 38-21 late in the third quarter.

Boston College got back on the board late in the third quarter when Rettig hit a wide-open Amidon for a 41-yard touchdown, trimming the Clemson advantage to 38-28.

It didn’t take the Tigers long to respond, however. The Tigers drove 75 yards in just six plays, the drive culminating when Boyd hit Hopkins from 35 yards out for a 45-28 lead. The touchdown toss tied Boyd with Charlie Whitehurst

Boston College took the ensuing kickoff and went 54 yards in 12 plays, scoring on a 39-yard field goal by Nate Freese to make it 45-31, and the Tigers were stopped on fourth down at midfield on their next series. Facing a fourth-and-one at the Boston College 48-yard line, Boyd handed off to McDowell, who was knocked back before he got to the line of scrimmage.

The Eagles drove down to the Tiger 20-yard line, but Garry Peters picked a good time for his first career interception, picking off Rettig at the Clemson 12-yard line with 5:45 remaining to end the threat.

Peters played late in the second half, and then was told by secondary coach Charlie Harbison

Charlie Harbison
Defensive Backs
View Full Profile that he would start the second half.

“I was really pleased with number 26,” Swinney said of Peters. “There’s a guy who hadn’t had much opportunity and has been waiting on his chance. He got his opportunity tonight and he really stepped up big time. He did a great job with his press technique and playing the double move. He did a great job with his eyes. It was great to see him do that.”

However, Boyd fumbled three plays later in Clemson territory, and Boston College had one final shot to make it a game. Travis Blanks

Travis Blanks
Fr. Defensive Back
#11 6-1, 190
Tallahassee, FL
View Full Profile ended the threat by batting down a fourth-down pass by Rettig, and Clemson was able to run out the clock.

“I’m proud of our guys,” Swinney said. “I am proud of them for bouncing back after coming off an emotional loss last week. They were ready to play. I am proud of them for handling adversity throughout the game. There were some definite ebbs and flows throughout the game, as you would expect going to somebody else’s place. Boston College has a lot of pride. They were excited to play. And they made some plays, but our guys responded all game long.”

Clemson returns to action next Saturday in Death Valley, taking on Georgia Tech in a 3:30 p.m. game.