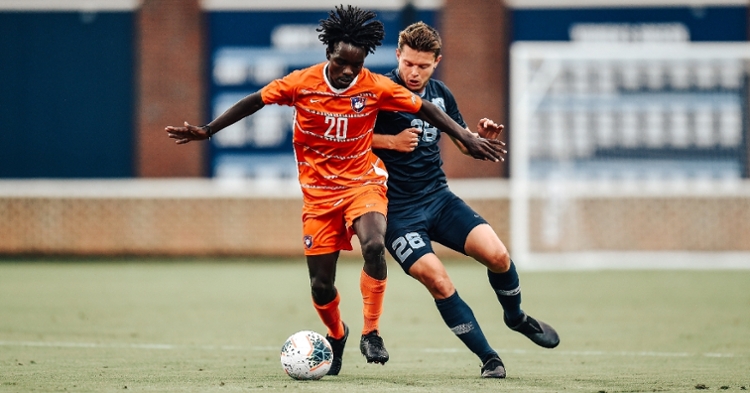 Mayaka had multiple projections for No. 1 in the draft previously. (Clemson photo)

Clemson senior defender Justin Malou also went in the first round at No. 27 overall to the Columbus Crew.

During his two seasons playing for the Tigers, Mayaka earned the start in 29 of his 32 appearances. The Nairobi, Kenya native contributed two goals and eight assists during his freshman season in 2019.

“Mayaka is the most MLS-ready player I have coached since being at Clemson,” said Clemson coach Mike Noonan in an earlier news release. “He has been a pleasure to coach, and any team would be happy to have him.”

The Nottingham, England native Smith led the nation in points (19) and goals (8) last fall, including a hat trick in the ACC Tournament. He scored 13 goals as a junior in 21 games (16 starts).

Malou, a Senegal native, made the 2020 All-ACC tournament team and started all 33 of his appearances over the last two seasons, also logging action in 24 games as an underclassman.

The Colorado Rapids select Philip Mayaka. Great value, and he joins a good young team. Not a direct need for the Rapids but you don't pass on a talent like Mayaka at that spot.

The top three players were pretty set pre-draft, though this order is a tad surprising.

A forward from England!

A Generation Adidas signee! What to expect from Philip Mayaka // #SuperDraft by @adidassoccer pic.twitter.com/LriikYgZ4Z

We can't wait to #CU take the field with @dcunited! pic.twitter.com/rXUKd0cdP1