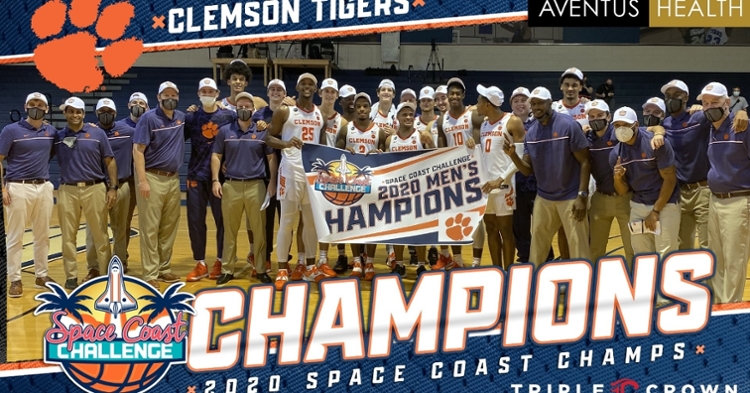 Aamir Simms scored 24 and Nick Honor added 17 to lead Clemson to a 81-70 win over Purdue and the Space Coast Challenge title. Clemson (2-0) played excellent defense for most of the night picking up 13 steals against the Boilermakers (1-1).

The title is the first regular-season tournament title for Clemson since the inaugural Charleston Classic in 2008.

Compiling an impressive shooting percentage of 49.2, the Tigers came out firing from the start and never let up, leading for nearly 36 minutes of action and leading by as many as 15 points. The Boilermakers were unable to contain the Clemson offense, and the Clemson defense forced 22 turnovers. The Tigers dominated in transition, outscoring Purdue 21-2 in fast break points, and also made 13-of-15 free throws. In addition, Clemson registered 28 bench points and 24 points off turnovers.

Simms stepped up in a major way, as the senior came through with one of the best performances of his decorated career. Shooting 8-for-13 from the floor, Simms led all scorers with 24 points to go along with his four assists, three rebounds and two steals. Honor drained four 3-pointers en route to racking up 17 points. He also tallied four steals and three dimes. Jonathan Baehre scored 11 points while serving as a spark plug for Clemson, and Al-Amir Dawes put together a balanced performance, registering 10 points, three assists, two steals and a team-high five boards.

Clemson used a series of 3-pointers to build an early lead. In fact, the Tigers’ first five successful field goal attempts all came from beyond the arc, including treys on back-to-back possessions by Simms. The second of Simms’ aforementioned three-balls put Clemson ahead 16-13 with just under 11 minutes remaining in the first half. Honor provided the Tigers with a big lift in the first half, and he converted a steal into a 3-point play that increased Clemson’s lead to 30-19 at the 4:33 mark. With 1:02 left in the first half, Clyde Trapp showed off his hops with an explosive dunk, and the Tigers took a 36-28 lead into the intermission.

Purdue got off to a hot start in the second half and knotted the score at 46 points apiece with 12:42 on the game clock. Soon afterward, Baehre produced a 6-0 run by himself, featuring a 3-pointer and a 3-point play. Dawes extended that run to 10-0 by knocking down a jumper, recording a steal and sinking another jumper with 9:02 remaining. The Tigers led the Boilermakers 58-48 at that point and held onto their lead the rest of the way. With a little under four minutes left, Dawes and Simms teamed up for the most electrifying play of the game. Dawes pulled off a spectacular steal by flinging the ball to Simms while leaping out of bounds, and Simms proceeded to drive to the basket and rock the rim with an emphatic two-handed slam.

Next up, Clemson is set to host the South Carolina State Bulldogs (0-1) at Littlejohn Coliseum on Wednesday, Dec. 2. The contest will tip off at 6 p.m. and air on ACC Network. Tickets are available at Clemsontigers.com/tickets.

“This was a good win. Obviously, I’m really happy for our players. With all they’ve been through, starting with the end of last season and all that’s transpired in our country since then. They’ve done some unbelievable things in terms of working hard, and, today, we played extremely hard. That was the difference. We knew Purdue’s size was going to be a problem. They’re hard to guard, but we had a wearying effect on them. It was good to see Aamir [Simms] bounce back and play the game that he played. I’m really proud of Jonathan [Baehre]. He was huge in the second half. I’m just happy that good things are happening to these guys.”

“We knew [defenders] were going to go at him and try go get him in foul trouble, so we used Aamir’s ability to play away from the basket. He posted some, but we moved him around a lot, and he was really efficient. He made different types of shots. That’s why he’s a good player. He can score in different ways. He was just fantastic tonight.”

“We have a lot of confidence in Nick. He’s one of our best shooters. He’s a difference-maker from the perimeter, and he continues to improve as a defensive player. He’s very fundamentally sound and takes care of the ball. He’s a great kid and a tremendous worker.”

Clemson has beaten Mississippi State and Purdue to open the season. First time since 1951-52 Clemson has started a season with consecutive wins over Power 5 conf teams.