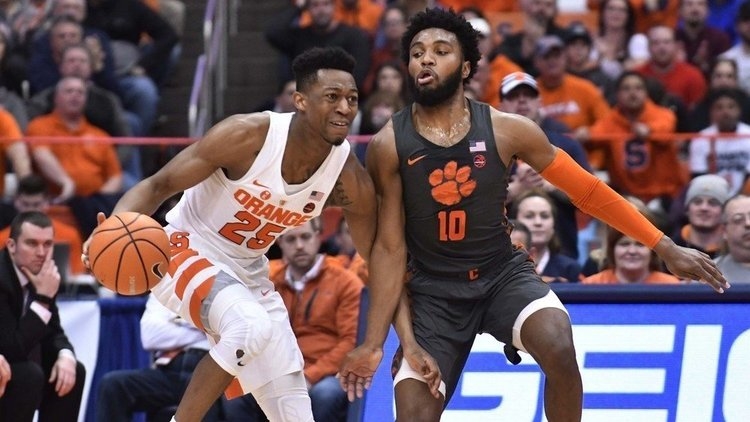 Clemson guard Gabe DeVoe’s half-court attempt to tie at the buzzer went off the backboard and rimmed out as Syracuse held on to a 55-52 home win.

No. 18 Clemson finishes the regular season with a school-record 11 ACC wins and a 22-8 overall record (11-7 ACC). With a Miami win over Virginia Tech earlier in the day, the Tigers clinched a double-bye in next week’s ACC Tournament and now awaits whether that will be a 3-seed or a 4-seed. Clemson’s only shot at a 3-seed is now if Louisville wins at NC State (6 p.m. tip) and Duke beats UNC at home tonight (8:15 tip).

If the current standings hold, Clemson is a 4-seed and would face the winner of NC State and the Boston College/Georgia Tech winner next Thursday around 2 p.m. in Brooklyn.

Back in Syracuse (19-12, 8-10), Clemson led by three at the halftime break, but an 11-0 run put the Orange out in front in the second half. Marcquise Reed and Elijah Thomas made sure the Tigers stayed right with them to the buzzer.

Reed sank four 3-pointers in the second half, including one to take the lead with five minutes left where he motioned with a finger to quiet the NCAA-season-record 28,760 in attendance at the Carrier Dome. Reed finished with a game-high 21 points on 8-of-13 shooting.

Thomas battled in the paint, scoring his ACC-season-high 18 points with six rebounds and 8-of-12 free throw shooting.

With Syracuse up by four with under a minute left, an Orange guard Tyus Battle jumper miss led to a Clemson run-out and easy bucket from Reed to cut the deficit down with 44 seconds to go.

Battle missed a shot-clock buzzer-beater on the ensuing possession, and a Reed drive-and-layup attempt was then rejected out of bounds. After an official review, Syracuse was awarded the ball, and they hit one of two from the line, and DeVoe hoisted the final shot of the game.

Clemson was bothered early by Syracuse’s length on defense in its textbook 2-3 zone, surviving a 10-minute field goal drought in the first half by earning its points at the free throw line.

The Tigers managed a 9-2 run to tie the game with under five to go in the first half and took the lead shortly after. Thomas knocked down seven of Clemson’s 10 made free throws to lead all scorers with nine and help the Tigers to a 25-22 lead at the half. Clemson was just 1-of-8 shooting from beyond the perimeter in the first 20 minutes.

DeVoe’s final attempt dropped him to 0-of-6 on 3-pointers for the game with four total points, but he added nine rebounds and five assists.

Oshae Brissett and Battle led the Orange with 17 points.