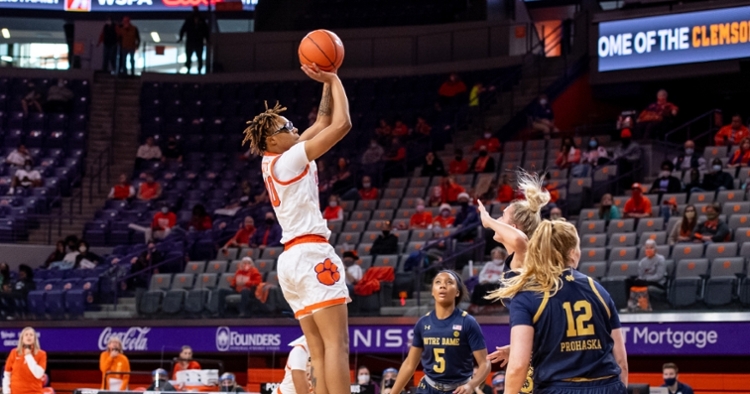 CLEMSON, S.C. — Clemson women's basketball routed the Notre Dame Fighting Irish in a 78-55 victory at Littlejohn Coliseum Sunday. Led by Gabby Elliott and her game-high 17 points, the Tigers defeated the Fighting Irish at home for the first time in program history.

Rebounding was integral to Clemson's (8-1, 3-1 ACC) success on the afternoon, as the Tigers won the rebounding battle 50-36 and gave up just nine offensive boards to Notre Dame (3-4, 1-2). The Tigers shot 40.6 percent from the floor, while the Fighting Irish accrued a field goal percentage of 36.8. Clemson connected on 16 free throws and six 3-pointers and tallied 13 assists. Furthermore, the Tigers forced 17 turnovers and recorded 32 points in the paint and 27 points off the bench.

Elliott's 17 points came via 6-for-12 shooting from the field and 4-for-6 shooting at the charity stripe. She also corralled four rebounds. Amari Robinson, who scored 11 points, was Clemson's leading rebounder with nine boards, and Kendall Spray amassed 11 points, as well. Delicia Washington tabbed 10 points to go along with her four assists, and Hannah Hank registered seven rebounds. Notre Dame's Destinee Walker scored a team-high 14 points.

The Fighting Irish jumped out to a 3-0 lead, but Delicia Washington incited the Clemson offense and helped the Tigers garner a 17-11 advantage through one quarter of play. Destiny Thomas drove to the hoop for a layup that served as the final basket of the opening period. Elliott and Spray came alive in the second quarter, with Elliott knocking down several jumpers and free throws and Spray sinking a pair of treys.

A Shania Meertens field goal with under 10 seconds remaining in the first half resulted in Clemson boasting a 42-22 advantage at the intermission. After outscoring Notre Dame 25-11 in the second quarter, the Tigers proceeded to win the third quarter 23-19. Elliott and Spray netted a three-ball apiece late in the period, culminating in Clemson's 65-41 lead at the start of the fourth quarter. From there, the Tigers cruised to a commanding 78-55 triumph.

The Tigers will return to action in 2021, as their next game is penciled in for 2 p.m. on Sunday, Jan. 3. Clemson and the Miami Hurricanes (4-2, 1-2) are slated to square off at the Watsco Center in Coral Gables, Fla., with the contest airing on ACC Network Extra.

"I think we played the game on our terms. I'm really, really proud of our team. This was our last game before Christmas, and we had great leadership. A lot of teams get distracted in games like this, but our team believed in how good they are and didn't want to let a game slip away that they knew they could win. The thing that is most exciting about our team is that our very best basketball is ahead of us in 2021."

On the keys to the win: