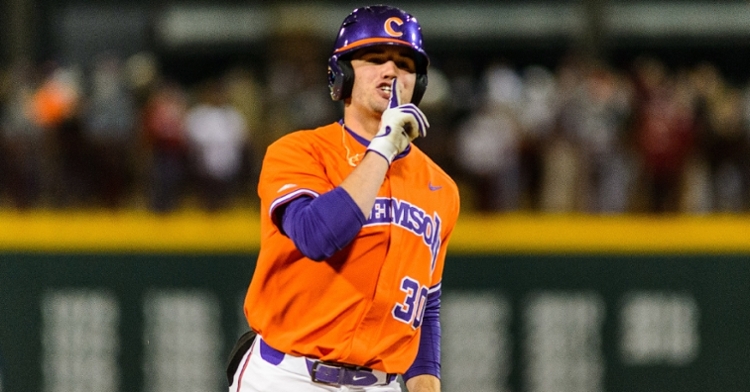 Davis Sharpe had another big night to lead the Tigers at the plate.

The Tigers (13-3) scored five runs in the first inning, highlighted by Sharpe's three-run homer over the Thomas F. Chapman Grandstands on a 1-2 pitch. Elijah Henderson hit a two-out, run-scoring single in the fourth inning, then Clemson scored three runs in the fifth inning, highlighted by Sharpe's two-run homer on a 1-2 pitch, his second long ball of the game and fourth of the season. Dylan Brewer added a three-run double in the seventh inning.

Clemson starter Jackson Lindley (1-0) earned the win by throwing just 53 pitches, as he gave up three hits, no runs and no walks with five strikeouts in 5.0 innings pitched. Tiger pitchers combined to not allow a Blue Hose baserunner to advance past second base and allowed just one to advance past first base. Clark Dearman (0-2) suffered the loss for the Blue Hose (2-14).

The Tigers host Winthrop at Doug Kingsmore Stadium on Wednesday at 6 p.m. on ACCNX. Fans can purchase a ticket for only $2.

Davis Sharpe with a DEEEEEEP three-run homer (400 feet to be exact) in the first inning to give #Clemson a 4-0 lead!

Hall singles to lead off, then Gallo & Cooper walk with one out before Brewer clears the bases! ????

Sharpe cranks his SECOND homer of the game in the fifth inning, this time a two-run shot! Both home runs have come on 1-2 pitches! ????