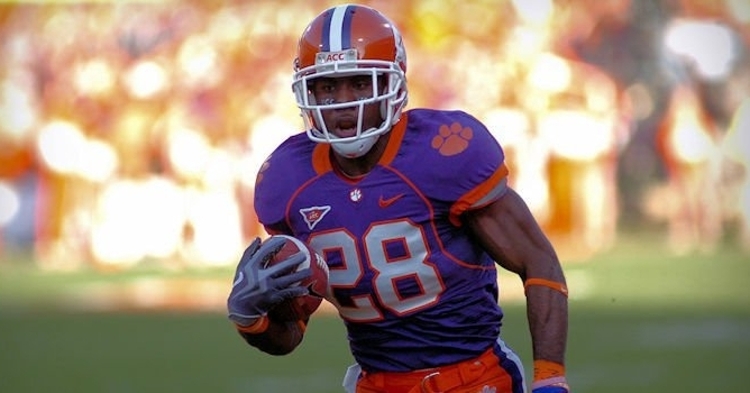 C.J. Spiller is one of Clemson's all-time greats

CLEMSON, S.C. — The National Football Foundation announced today that Clemson legend C.J. Spiller has been selected for induction into the College Football Hall of Fame as a member of the Class of 2021. Spiller earned the distinction in only his second year of eligibility.

Spiller is one of 11 players and two coaches in the 2021 College Football Hall of Fame Class selected from the national ballot. The class will be officially inducted during the 63rd NFF Annual Awards Dinner on Dec. 7 alongside the 2020 Hall of Fame Class, whose ceremony was postponed due to COVID-19.

Spiller becomes Clemson's eighth inductee in the College Football Hall of Fame. John Heisman, who coached Clemson from 1900-03, was Clemson's first inductee as part of the Class of 1954. Clemson coach and administrator Jess Neely was inducted in 1971. Frank Howard, Clemson's all-time winningest coach, followed with induction in 1989. Danny Ford, who led Clemson to the 1981 national championship at the age of 33, was Clemson's most recent inductee, entering the Hall in 2017.

Spiller's historic Clemson career spanned 2006-09, culminating with a senior season in which he finished sixth in Heisman Trophy voting after winning ACC Player of the Year and being selected as a unanimous first-team All-American. That season, Spiller scored 21 touchdowns and became the first player in ACC history to gain 1,000 yards rushing and 500 yards receiving in the same season.

Spiller still holds ACC single-season and career records for all-purpose yards, posting 2,680 in 2009 and finishing his career with 7,588, still third in FBS history. He gained 3,547 rushing yards, 1,420 receiving yards, 569 punt return yards and 2,052 kickoff return yards. No player in ACC history was within 1,700 career all-purpose yards of Spiller until this year, when Travis Etienne finished his career with 6,894 yards, still 694 yards shy of Spiller's mark.

One of the most exciting players in the sport's history, Spiller had 21 career touchdowns covering at least 50 yards. He had eight kick returns for touchdowns in his career, most in ACC history. In the spring of 2010, he was the ninth overall selection in the NFL Draft by the Buffalo Bills. He went on to play eight years in the NFL and was selected to the Pro Bowl in 2012.

Of the 5.47 million individuals who have played college football since Princeton first battled Rutgers on Nov. 6, 1869, only 1,038 players and 223 coaches have been immortalized in the Hall, including those slated for induction in the Class of 2021. Selection to the Hall of Fame puts those who earn the distinction in the top 0.02 percent of those who have played or coached college football.

The full College Football Hall of Fame Class of 2021 is included below.

“This truly is a humbling experience. When Coach [Swinney] called me, I honestly didn't know what he was calling about. He gave the whole spiel about how I was his first five-star recruit, his first first-rounder, first Pro Bowler, and he was like, 'Now, big dog, you're my first Hall of Famer.' I said, 'You're joking. Quit playing.' I was really speechless. But this is through the grace of God, honestly. It's awesome to realize the dreams and the goals that I wrote down on that sheet of paper as a little kid. Seeing some of those things come to fruition, that's a blessing in itself and a testament to all the kids out there to always believe in yourself and always believe in the goals that you write down.

"I can't thank [Clemson fans] enough, honestly. I know it's my name that's going in, but the Clemson Family is going into the Hall of Fame as well. The way that they welcomed me with open arms 14 years ago when I stepped on this campus in 2006 to the way that they still show their love to me and my family now, there's nothing I can do to repay them, but hopefully this is a small token of the hard work and sacrifice that not only I made but all of those who supported me as well to try to have a day like this. I will always be grateful for the Clemson Family."

"As I told him, he's such a deserving guy. For him to get in on his second attempt is such a compliment to the respect for his college football career. It was an amazing career. I'm just so happy for him and his family, all of his teammates and all of his coaches because C.J. would be the first one to tell you he had a lot of people that helped him along the way. For me personally, he was my first five-star, my first first-rounder, my first Pro Bowler, and now my first College Football Hall of Famer. Hopefully there will be some more to come down the years, but it's only fitting that C.J. was the first. I'm really just super proud of him and happy for him and look forward to the celebration later this year."

“That is just phenomenal news and says so much about him that he got in so quickly. You hear people talk about someone who receives an honor and that he is a better person than he was a player. Well, that applies to C.J. What a great ambassador he has been for Clemson and college football. He was a player who was a national recruit who brought national attention to Clemson by coming to the school, and then what he did as a player — he put a spotlight on the program and what he did has led to more great players coming to Clemson. We see what the program has done since he graduated. This is very deserving.”