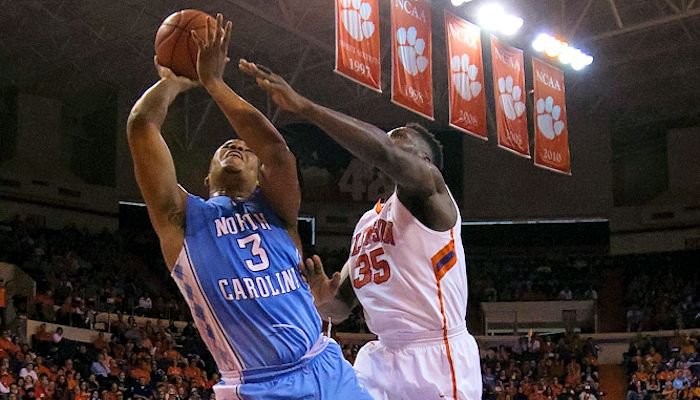 Landry Nnoko had just two points for Clemson in the loss (Photo by Joshua S. Kelly)

CLEMSON – An awful start got even worse for Clemson.

Nineteenth-ranked North Carolina jumped out to a quick double-digit lead and never trailed in routing Clemson 74-50 in front of a mixed crowd and ESPN television audience at Littlejohn Coliseum Saturday night in the ACC opener for both schools.

The loss was the worst home loss in the Brad Brownell

"I thought they (UNC)played very well tonight," Brownell said. "We struggled. We guarded them okay for the first 10 minutes, but we had some breakdowns with things that we obviously have to be better at. Overall, I think our offense was a problem. They guarded our ball screens very well and we didn’t make any shots early. That puts a lot of pressure on you, as a team. Their shot blockers around the rim are really a factor. We had trouble getting the ball inside, because they did a good job pressuring our passers and getting deflections early, which caused us to keep the ball out of the post when we were trying to find Landry (Nnoko).”

Jaron Blossomgame
RS So. Forward
#5 6-7, 215
Alpharetta, GA
View Full Profile was in double figures for the 12th time in 13 games and led the Tigers with 13 points, while Damarcus Harrison

The Heels jumped out to quick 5-0 lead, but the Tigers trimmed the lead to 7-5 on a runner by Donte Grantham

Donte Grantham
Fr. Forward
#15 6-8, 205
Martinsburg, WV
View Full Profile at the 15:22 mark. The Tigers would score just two points over the next seven minutes, however, and a jumper by Grantham saw the Tigers trailing 16-9 with just over eight minutes remaining in the first half.

The Tar Heels then went on a 23-5 run over the next seven minutes, and only Damarcus Harrison’s 3-pointer just before the buzzer gave the Tigers any comfort as they trailed 39-17 at intermission.

“We played well in the last part of the first half," UNC head coach Roy Williams said. "We shared the ball and didn’t turn it over. We played perhaps the best basketball we’ve played all season. Saying all that, I will say that Clemson missed shots tonight that they’d normally make. I even told Coach (Brad) Brownell that it was the best half we’d put together all season.”

The lead continued to grow and a rebound and fast break layup by the Heels’ Justin Jackson doubled up the score for the Heels at 60-30, forcing Brownell to call a timeout with just over nine minutes remaning in the game.

It doesn't get any easier for the Tigers - they play at 5th-ranked Louisville next Wednesday and are back at Pitt next Saturday.