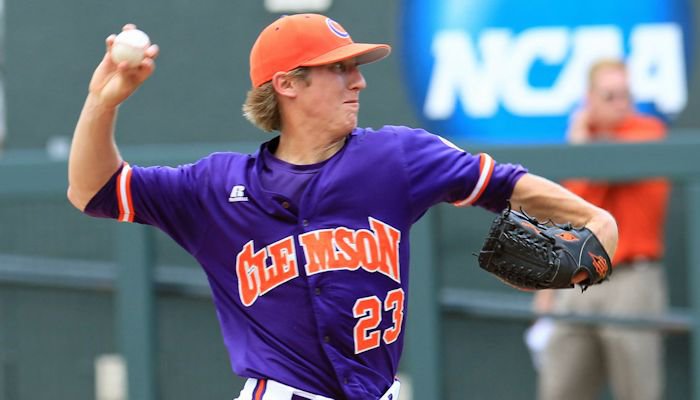 Gossett threw an astounding 71 of 99 pitches for strikes but it was not enough against Xavier.

NASHVILLE, TN – National pundits said Monday that Clemson might have been the last team picked for the 64-team NCAA Tournament field. During the NCAA at Vanderbilt Friday and Saturday, they played like a team that didn’t deserve even a “last team in” distinction.

Fresh off of an 18-1 loss to Oregon Friday, the Tigers depended on Gossett to send them into Sunday’s play, but a lighting delay in the seventh robbed them of Gossett with Clemson trailing 3-2. Two Clemson relievers then gave up four runs - helped by bad defense – and the Tigers couldn’t muster enough of a comeback.

Jay Baum
Jr. Infielder
#13 6-0, 190
Alpharetta, GA
View Full Profile allowed a ball to drop in for a run-scoring double and a 1-0 Musketeer lead.

The Tigers finally scratched against Xavier in the fourth when Boulware and Baum hit back-to-back doubles. Baum’s double bounced off the big left field wall and Boulware scored the tying run. The Tigers eventually had runners at second and third in the inning, but a fly out ended the inning.

The Tigers went ahead in the fifth – again with two out – starting with one of the stranger plays of the day. Krieger lined a ball off of the Xavier pitcher and when the ball rolled into the outfield, turned the liner into a hustle double. Steven Duggar

Steven Duggar
So. Outfielder
#9 6-1, 185
Moore, SC
View Full Profile followed that with a soft single into left-center that scored Krieger for the 2-1 lead.

The Musketeers used a single, a bunt and another single to tie the score in the bottom of the inning, and got a two-out double in the gap to take a 3-2 lead.

Weston Wilson
Fr. Infielder
#8 6-3, 195
High Point, NC
View Full Profile . With a 1-2 count on Dunster, the umpires interrupted play because of lightning in the area, and Gossett’s day was done after a delay of 1:48 with no lighting and only a few drops of rain.

Gossett’s final line showed three earned runs in his six innings of work, and he struck out five while walking none. He also threw an astounding 71 of 99 pitches for strikes. He was replaced on the mound by Drew Moyer

Dunster grounded out and Slaton flied out once play resumed, and Dunster lasted just one batter in the field before having to leave after diving for a ground ball single. He was replaced by freshman Eli White

Moyer threw wild on an attempted bunt to put runners at first and second, and another bunt put runners at second and third with one out. Mitch Elliott promptly lined a single into left field that scooted under Boulware’s glove and rolled all the way to the wall, allowing both runs to score and Elliott to advance all the way to third. A wild pitch by Clay Bates

"I wanted to throw the guy out at home and I rushed it," Boulware said. "I came up too soon. It had been hopping a little this weekend and I was kind of expecting to see the same bounce and it didn't that time. Obviously, I should have slowed myself down and focused more on the ball."

Moyer’s stat line was indicative of the kind of day it was – he gave up three runs on just four pitches, even though just one was earned.

Steve Wilkerson
Sr. 2nd Base
#17 6-1, 195
Roswell, GA
View Full Profile hit a long two-run homer to right in the bottom of the eighth – his sixth of the year – but the Tigers couldn’t manage a comeback in the ninth.

The Tigers finished the season with a 36-25 record.