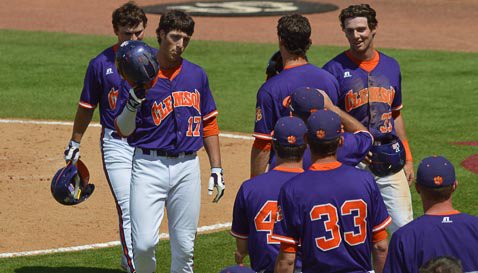 Wilkerson greets him teammates after his second home run

COLUMBIA – The Clemson offense needed a jolt Saturday to wake it up out of a slumber that had lasted for the better part of 25 innings. Tiger second baseman Steve Wilkerson provided that jolt, and he did it in a big way.

Wilkerson hit two home runs and drove in five runs in leading Clemson to a 10-2 victory over St. Louis in the losers’ bracket game of the NCAA Regional at Carolina Stadium Saturday afternoon, avoiding an early end to their season and picking up the 40th win of the 2013 campaign. The win also ended a six-game losing streak that dated back to the end of the regular season.

The Tigers had scored just three runs in their previous 25 innings before Wilkerson and Kennedy provided the thunder with three total homers as the Tigers scored three runs in each of the third and fourth innings and three in the ninth in breaking out the big bats for the first time since losing to North Carolina in the ACC Tournament last week.

The Tigers also kept an NCAA Tournament streak alive – in 26 consecutive appearances the Tigers had never failed to win at least one game, dating back to an 0-2 tourney in 1982.

“We played a good game today,” Clemson head coach Jack Leggett said. “Our pitching was good and I thought we played really good defense. We got some timely hits and some guys had a big day for us- Stevie and Shane. We had some me on base and got some hits with men on base. Our base running was good and I thought our offense was aggressive as far as our swings. It was just a lot better ball game than where we were yesterday and now we just have to keep playing one game and one inning at a time.”

Wilkerson said the first homer came at an opportune time.

“It’s always big to break the ice and get that first run across the plate,” Wilkerson said. “It brings energy to the dugout and kind of gets everybody going and everybody into it. I think after we scored that first run we just kept passing the positive energy to the next guy and we started swinging it for the rest of the day.

“It felt pretty good to say the least. I haven’t been swinging it particularly well the last couple of weeks and it’s a funny game and one little thing can click for you. Today a little mechanical thing clicked for me and I just tried to implement that into the game and it worked today.”

Clemson starter Daniel Gossett gave up a first inning run run after a walk, a double and a sacrifice fly. The Tigers loaded the bases in the top of the second with no one out and failed to score, leaving many wondering if the Tigers would manage to break through.

That all changed in the top of the third. Thomas Brittle drew a leadoff walk, and Steve Wilkerson snapped out his recent slump by drilling a 2-0 fastball over the wall and onto Williams St. in right field to give Clemson its first lead of the regional at 2-1. Two outs later, Kennedy hit his third homer of the season – a bomb to deep left field – to give the Tigers a 3-1 lead. The two homers marked the first time all season that Clemson had hit two homers in the same inning.

The Tigers continued to add on in the fourth, setting the stage for Wilkerson. Kevin Bradley started the fireworks by reaching on a one-out error. He stole second, and Tyler Slaton walked to put runners at first and second with one out. Brittle struck out for the second out, but Wilkerson drilled a 3-1 pitch over the wall in right for his second homer of the game and a 6-1 Clemson lead.

Wilkerson had just two home runs on the season, but homered in back-to-back innings to double his season total. Wilkerson was also the first Tiger to hit two homers in the same NCAA game since Jason Stolz did last year, also in Columbia. Ironically, Stolz’ homers, which came against Coastal Carolina, were in the third and fourth innings, the same as Wilkerson’s homers.

Gossett gave up a leadoff homer in the fifth, but settled in and got the Tigers through the sixth inning in picking up his 10th win of the season. He gave up five hits, two runs (both earned), walked five and struck out two while throwing 115 pitches.

“I thought Goose was good for us on the mound today,” Leggett said. “He wasn’t exceptional with all of his stuff as far as command, but he battle through it for us. His pitch count got up there a little bit earlier than we would’ve liked, but Kyle Schnell came in and did a great job for us.”

The Tigers added a run in the 8th and two more in the 9th to account for the final score.

Clemson freshman reliever Kyle Schnell gave the Tiger pitching staff a much-needed rest by pitching the final three innings – allowing no runs – in picking up his second save of the season.

The Tigers will play the loser of Saturday night’s South Carolina-Liberty game at 1 p.m. on Sunday. The winner of that game advances to play the Saturday night winner in a game that will start at 7 p.m. Leggett said that either freshman Matthew Crownover or Scott Firth would start Sunday’s game.