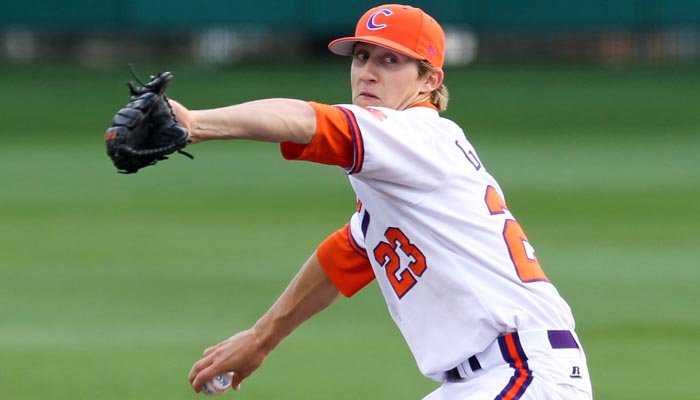 Clemson (14-7, 6-1 ACC) entered the series tied with Florida State (17-4, 5-2 ACC) for first place atop the ACC Atlantic Division standings, but takes a one game lead with a doubleheader looming Saturday.

Gossett was outstanding, pitching 7 1/3 innings, giving up one earned run while striking out eight and walking four. He threw 124 pitches, 74 for strikes.

"Goose did a good job for us tonight," Clemson head coach Jack Leggett said of Gossett's effort. "He was in charge. he did a good job for us. We got a little momentum early in the ballgame offensively. We swung the bats well, we played good defense and the combination of those things will allow you to beat a good team. Now we have to refocus and come out ready to play two."

Gossett said it was one the best games of his career.

"I had one of the best games of my career, and it just happened to be against the best team in the nation," Gossett said. "I knew they were going to come out swinging the bats, and they are a great hitting ball team. I figured I needed to at least match it. I just had it all rolling, and it felt good tonight. In the second or third inning, I made a subtle adjustment to my mechanics and my fastball jumped up three miles an hour. And, for as many pitches as I did throw, my arm feels fantastic."

The Tigers got to Seminole starter Luke Weaver in the second – Okey beat out a grounder to short with one out, and he went to third on Steve Wilkerson

Steve Wilkerson
Sr. 2nd Base
#17 6-1, 195
Roswell, GA
View Full Profile ’s double into the right-center field gap. Kennedy – seeing his first ACC action of the year – lined a single off of Weaver to score Okey for a 1-0 lead. Weaver appeared to be rattled, and he was called for a balk that plated Wilkerson with Clemson’s second run.

Boulware brought the Doug Kingsmore crowd to its feet in the bottom of the third, drilling Weaver’s 0-1 pitch to dead center, the ball clearing the wall in front of the hitting backdrop for a 3-0 lead. The homer was Boulware’s second of the season.

Gossett said it was easier to pitch with a lead.

"Absolutely. No doubt. We are swinging that bats right now," Gossett said. "It makes it easier to pitch when you know you have a cushion. It's not as stressful, and if we keep swinging like that I think we are going to be in pretty good shape."

Jameis Winston – who entered the game in the fourth after FSU centerfielder Ben DeLuzio ran into the wall chasing Boulware’s homer – got the Noles on the board in the fifth with an RBI single.

It didn’t take long for the Tigers to get that run back. Tyler Slaton

Boulware followed that up with a bouncer up the middle, scoring Krieger to make it 5-1, and Duggar dumped a single into right field, advancing Boulware to second. Okey then laced a single over second to plate Boulware, giving Clemson a 6-1 lead through five.

Weaver gave up a career-high 11 hits to the Tigers in his seven innings of work.

Wilkerson walked to lead off the eighth, Kennedy singled to advance Wilkerson to third and Jay Baum

Due to the threat of inclement weather Sunday, Clemson and Florida State are now scheduled to conclude their three-game series Saturday with a doubleheader. Game times are 2 p.m. and 6:30 p.m.

For ticket holders, Saturday night's 6:30 game is still Game 2 of the series. Tickets for Sunday's game will be honored for the 2 p.m. contest, and the stadium will be cleared between games. Both games will be on ESPN3 as well.