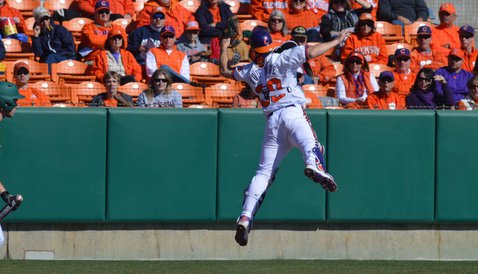 CLEMSON - Nothing came easy for the Tigers during their opening weekend of baseball, but Jack Leggett’s team found a way to battle back from a late-inning deficit to win its first series of 2014.

Clemson and Eastern Michigan battled for much of the day before Clemson took control in the eighth inning for a 9-7, series-clinching victory Sunday afternoon at Doug Kingsmore Stadium.

The Tigers trailed 7-6 going into the eighth inning, but a two errors and a single by Jay Baum allowed three runs to score for the final margin.

Baum finished the day with three hits, two runs and two RBI in five at bats, and he said that he was just trying to do what his team needed in order to win the ball game.

“It feels great. It was team win and that’s all that I’m worried about,” Baum said after Sunday’s win. “To get three hits, that’s what I’m trying to do everyday. I was just trying to get the ball in play and hit it hard [in the eighth].”

Clemson struck first with a three-run first inning that saw Garret Boulware single to right field to score Tyler Slaton, who reached base on the first of four errors on the day by the Eagles. Newcomer Chris Okey singled to right just two batters later,allowing Steven Duggar and Boulware to score, giving the Tigers an early 3-0 lead.

Boulware singled to right on his second time up scoring Eli White, who doubled to begin the second for a 4-1 Clemson lead.

Freshman righty Jake Long made his first start as a Clemson Tiger and allowed only a walk in the first two innings, but the third inning was his undoing as the Eagles scored four runs on five hits, tying the game at 4-4.

Baum hit a rocket all the way to the center field wall to lead off the fifth inning for Clemson and scored on a hard-hit flyball down the left field line by Okey, giving Clemson a 5-4 lead.

Clemson added to it’s lead in the sixth inning when Baum grounded out to the shortstop, scoring Tyler Krieger from third, making it 6-4

Once again, the tag-team of Clay Bates and Clate Schmidt came in to pitch three flawless innings, before Schmidt began to tire in the seventh, giving up two runs on consecutive doubles by Sam Ott and Lee Longo for a 6-6 tie.

Senior Matt Campbell came and pitched the final two and two-thirds innings for the Tigers, giving up only one unearned run in the seventh, picking up his first win of the season.

Leggett said that overall he learned a lot about his team and what they are capable of – lessons they can take into the rest of the season.

“They’re scrappy and they’re tough with two strikes,” Leggett said after the game. “They kept coming at us and we learned some lessons this weekend. We need to get better in certain areas and parts of the game. We struggled a little bit in the third inning, but our kids have toughness, too. We had to battle back, relinquished it, got it again, lost it and got back the final time. We showed some resilience too. I liked some of the things I saw. We’ve just got to get a little better, keep playing. We had four freshman in the lineup today, so we’ve still got some youth. Everybody just has to continue to get a little bit better. We had a pretty good weekend.”

The Tigers will return to action Friday afternoon when they host Maine in a 4 p.m. game at Doug Kingsmore.