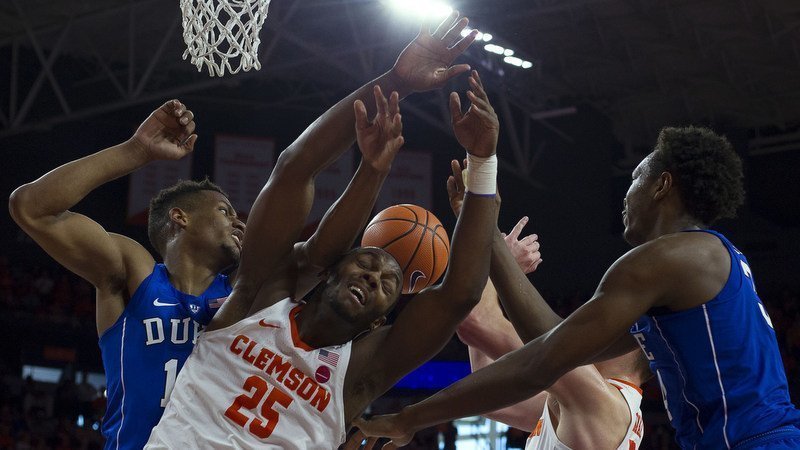 Aamir Simms is hammered inside (Photo by Josh Kelly, USAT)

CLEMSON – Clemson had their chances against Duke Sunday afternoon, but too many turnovers and not enough scoring was the difference.

The Tigers tied the score at 57-57 with under two minutes to play but No. 12 Duke hit shots down the stretch and the No. 11 Tigers didn’t as the Blue Devils escaped Littlejohn Coliseum with a 66-57 victory, taking over sole possession of second place in the ACC in the process.

Clemson got 13 points from Marcquise Reed and Elijah Thomas, while Mark Donnal and Aamir Simms each added 10. Gabe DeVoe scored just three points – he was 1-10 from the field and just 1-8 from 3-point range. Grayson Allen led Duke with 19 points. Clemson committed 13 turnovers.

"Really competitive basketball game, I thought. Both teams, I thought, defensively were very good," head coach Brad Brownell said. "I thought our guys really competed throughout the game, did a great job rebounding, defending. We just have to play better basketball. We just have too many costly mistakes, whether it's turnovers on inbounds plays or fouling three-point shooters. Obviously, that was a huge play at the end of the game. We got all the momentum and a 10-0 run, maybe to tie at 57 and then you don't make them make a basket. It just changes the whole outlook on the game. Those kinds of plays are the ones that are disappointing. There were a couple of offensive rebounds that we just go back up and get blocked instead of playing with poise and bringing it back out. I thought our guys really competed. I thought we guarded Grayson Allen very well and Gary Trent, Jr. very well. Give Duke a lot of credit, their kids came in here and you could see a good focus in their eyes and they competed hard and played well and made a couple of more plays down the stretch than we did."

"That was a really tough ACC game. I thought both teams played their hearts out. Both teams are suffering from some injuries," he said. "Clemson with two guys out, but the kids on the court just put their hearts on the court. Tough to score points today. I thought both teams played outstanding defense and points were tough to come by. When we got that 10 point lead, we had a couple of good looks and were not able to knock them down and they stayed in with it, which you expect them to do and all of a sudden it's a tie game and our kids responded. Gary's three free throws were huge. I think both teams were tired at the end. We're really tired and to play those last two minutes like that as a young group, some of these young guys grew up a little bit more today. Our defensive rebounding was outstanding. Our defense was very good today. We've become a pretty good defensive team."

The first half was exciting at times, sloppy at times and intense at times. Duke didn’t hold a lead larger than three and Clemson’s largest lead was six. Three-pointers by Aamir Simms and Mark Donnal gave Clemson a quick 6-0 lead, but Duke’s Grayson Allen caught fire Allen and pushed Duke on a 15-6 run that saw the Blue Devils take a 15-12 lead.

Clemson didn’t score in the last 2:09 of the half and missed its last five field goals, with Duke facing a similar scoreless drought and the Blue Devils led 35-34 at intermission. With point guard Shelton Mitchell sidelined because of concussion protocol the Blue Devils employed a full-court press that forced the Tigers into six early turnovers.

The early part of the second half was back-and-forth with neither team taking control. However, the Blue Devils appeared on the verge of doing just that with a 5-0 run that put Duke up 46-40. Clemson had chances to cut into the lead and Duke had chances to push the lead out even further, but a dunk by Thomas made it 46-42 and a 3-pointer by Reed off of a Grayson Allen turnover made it 46-45 with 12:25 to play in the game.

The Blue Devils came out of the timeout hitting their shots while the Tigers couldn’t buy points. Duke went on an 8-2 run while the Tigers struggled through a two-plus minute scoring drought, hitting just 1-8 field goals in the process, and Brownell called a timeout with Clemson trailing 54-47 at the 7:34 mark.

The Tigers committed another turnover coming out of the timeout and Duke hit a 3-pointer to take the biggest lead of the game at 57-47. Reed broke the drought with two free throws, but Clemson’s drought without a field goal hit six minutes before Reed drove the lane for a bucket, getting fouled in the process, at the 3:55 mark. Reed hit the free throw and Clemson trailed 57-52.

Meanwhile, the Blue Devils were in a funk of their own, going scoreless during a five-minute span. Another Duke turnover led to a Gabe DeVoe corner three – his first of the game after a 0-9 start from the field – and Duke called timeout ahead 57-55 with 2:17 to play.

David Skara promptly followed with a shot off the glass, and Littlejohn exploded with the score tied at 57-57 with just under two minutes to play. The Tigers fouled Duke on a 3-point attempt, however, and Gary Trent sank all three free throws to put Duke ahead 60-57 at the 1:31 mark.

Clemson allowed another Duke bucket and couldn’t hit a shot on the other end and Duke put the game away with free throws.