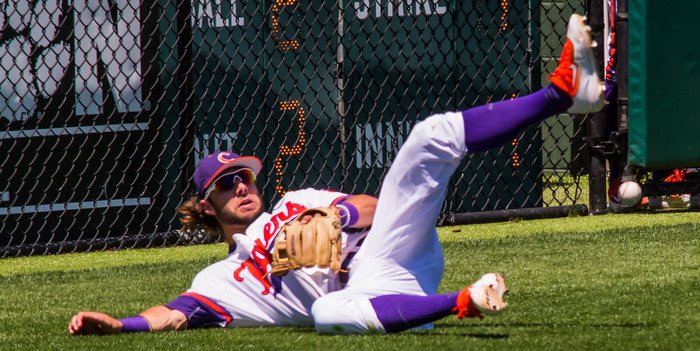 No. 23 Clemson wore high socks for the first time in years to change recent luck but fell into another four-run hole in the first inning and lost the game and the series to Georgia Tech, falling 7-5 at Doug Kingsmore on a sun-drenched afternoon as a ninth inning rally fell short.

Gilliam was replaced by former Friday night starter Clate Schmidt, who managed to end the threat. Overall, Clemson’s starters pitched a total of six innings in the three games and gave up a combined 13 earned runs. In total, Clemson gave up 45 hits during the three-game series.

Meanwhile. Clemson’s bats were strangely quiet. The Tigers scored just one run in the second game of the series and muddled through the first three innings of Sunday’s game before showing life. Weston Wilson singled to left to start the bottom of the fourth, and the Yellow Jackets pitched around Seth Beer, walking Beer to put runners at first and second. The next two batters flied out, but Eli White singled to left to score Wilson for the Tigers’ first run. Andrew Cox promptly lined a single to right to score Beer and Tech had a 5-2 lead after four innings.

Jordan Greene and Chase Pinder walked to lead off the bottom of the fifth, and Greene advanced to third on a fly to center by Wilson. Beer then drove a long fly to center that scored Greene to make it 5-3 Tech through five innings.

Tech’s Connor Justus continued his torrid hitting against the Tigers, smacking a solo homer to left in the top of the sixth to make it 6-3. All eight of Justus’ homers this season have been solo shots.

Tech added another run in the eighth to chase Schmidt and make it 7-3, but Schmidt turned in a solid performance out of the bullpen. He wound up pitching seven innings, giving up three runs, striking out two and walking none in his 85 pitches.

The Tigers loaded the bases with two out in the eighth, but Chris Williams struck out to end the threat. In the ninth, Robert Jolly and Pinder led off with walks. Wilson grounded out for the first out but both runners moved up on the play. That brought up Beer, who delivered an RBI single to right to make it 7-4. Okey walked to load the bases for Rohlman, who hit a soft roller in between third and short for an RBI single to make it 7-5.

White lined what appeared to be a single to center, but the pitcher took the brunt of the hit and got the force out at home to keep the margin at 7-5. That brought up Cox, who grounded out weakly to end the threat, series and game.

Due to exams, the Tigers won't have a midweek or Friday game this week. The Tigers will host Florida St. in a three-game series starting Saturday and running through Monday. Game one will start at 6:30 p.m., Sunday's game two will start at 4 p.m. and Monday's finale will start at 7 p.m.