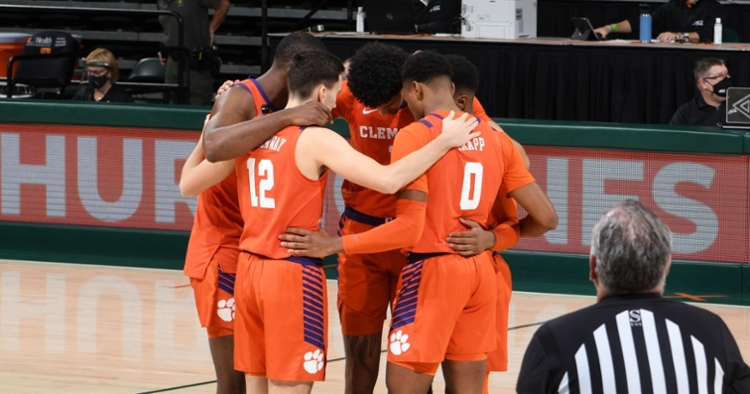 The No. 12-ranked Clemson men's basketball team returns to action Saturday after a week-plus between games due to COVID-19 complications, welcoming the No. 18 Virginia Cavaliers into Littlejohn Coliseum.

The Tigers enter the contest with a 9-1 record and are 3-1 in ACC play. Brad Brownell has his squad riding a four-game win streak, but how will the layoff affect the team?

The Tigers found out about the positive test last Friday right before practice and had to pull the players off the court. Clemson’s road games against North Carolina and Syracuse last week were postponed, and at this time, no makeup date has been announced for both games.

“It’s definitely difficult when you’re playing well and your guys are excited and want to go out and compete,” Brownell said during his weekly press conference on Friday morning. “We were able to get some skill work on Tuesday, and we were back in practice on Wednesday and Thursday. Honestly, Wednesday wasn’t very good, you could tell guys had been off for three or four days.”

The 11th-year Tigers head coach, who had to watch practices on Zoom before returning back to the program on Friday opened up about the challenges of having to coach virtually.

“It was hard. I haven’t missed many practices in my career, as an assistant or a head coach," Brownell told the media Friday morning. "There were a few times I had my phone next to me and I was calling Coach Simmons telling him, 'Hey, our spacings off a little bit, or we need to defend this differently.' I do think there’s a difference when the coach is there during practice, compared to when he’s not.”

Looking forward to the game at hand, Brownell knows it will be a game of defense vs. defense. Virginia comes into the game with the second-best scoring defense in the ACC, right behind Clemson.

“They’re hard to beat one-on-one, and Tony (Bennett) does an incredible job of coaching that part of it," Brownell said. "He’s got great athletes to do it, too.”

The Cavaliers, who enter the contest with an 8-2 overall record and a perfect 4-0 mark in conference play, are led by forward Sam Hauser, who averages around 13 points per game. Inside the paint, Aamir Simms will have his hands full on both ends of the court with Virginia’s 7’1 center Jay Huff. Huff leads the ACC in field goal percentage and is second in the league in blocked shots. For a player his size, Huff can also step outside and knock down 3-pointers, as he’s shooting 38% from behind the arc.

This game will come down to what team shows up with a better offense. We know both of these teams can get it done on the defensive side of the ball, as they have proved game in and game out. Freshman P.J. Hall could see himself log some minutes down the stretch of the game if Simms gets into foul trouble and the Tigers will have to rely on the outside shot to fall if they want to improve to 4-1 in ACC play.

The game's ESPN broadcast is scheduled for a 6 p.m. start.