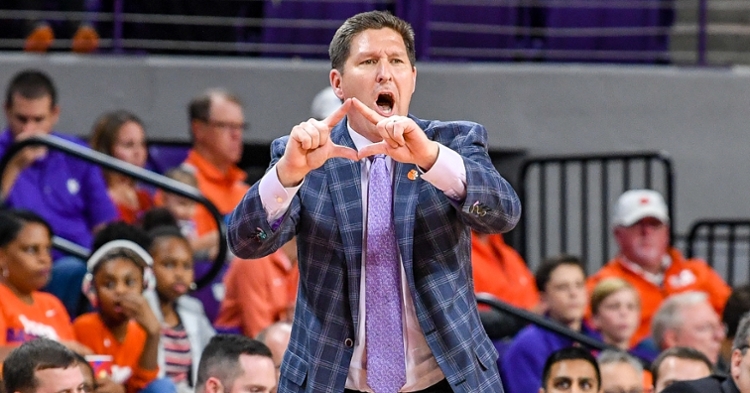 Clemson and Maryland renew acquaintances Wednesday afternoon when the Terrapins come calling as part of the ACC/Big Ten Challenge.

The Tigers (3-0) have opened the season with three-straight wins, including two against Power 5 opponents. Clemson will play Maryland (4-0) for the first time since the 2013-14 season, the Terrapins’ last as an ACC member school.

The contest will be televised on ESPN2 at 5 pm with Doug Sherman and Cory Alexander calling the action, while Don Munson and Terrence Oglesby will call the action on the radio waves. The radio call will be available on the Clemson Tigers Network and Tunein.com.

Maryland is shooting 56 percent from the field, the ninth-best mark in Division I. In Ken Pomeroy’s rankings for effective field goal percentage, which gives three-pointers 50 percent more credit, Maryland is the nation’s second-best team.

“This is a talented Maryland team. When you look at their team, you are crazily impressed by their numbers right off the bat offensively,” head coach Brad Brownell said. “Their efficiency is at a high level and they are shooting the ball well at all three levels. They have older and experienced guards with size and strength and have been through the wars. They play the game with poise and a lot of confidence. They are changing defenses and mixing in some zone, certainly man-to-man and you can tell they have a winning culture. Very impressive when you watch them on film so far this season.”

Hart was impressive against St. Peter’s.

“That is a guy that didn't play quite as much as the other guys last year. Great size, stroke, had 32 points the other night and the efficiency jumps off the page to me,” Brownell said. “They take open shots and they take good shots, which is a rarity in college basketball. He was unbelievable the other night and he is playing with a lot of confidence. You can tell he has size and a quick release and shoots with range. He is certainly an added dimension to an already talented backcourt.”

The last time both programs matched up, Maryland was still a full-fledged member of the ACC. The Tigers topped the Terps 77-73 in double overtime on March 2, 2014. Now, Clemson fans get the chance to see the Terps as Big Ten members.

“I think it is great for our fanbase to see them play an (old) ACC school,” Brownell said. “I've known (head coach) Mark (Turgeon) a really long time and he's a good coach. I think it's neat to have those guys back in Clemson. They have a really talented team, though, and we will have our hands full.”