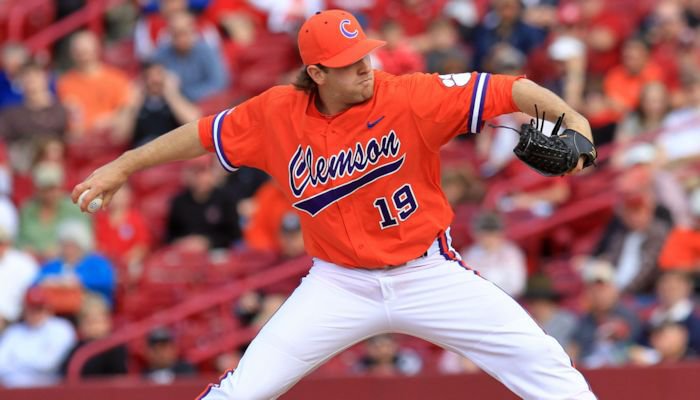 Koerner pitched 116 pitches, 72 for strikes, and didn’t allow a South Carolina runner to reach second base until the sixth inning.

Brody Koerner
Jr. RH Pitcher
#19 6-2, 200
Concord, NC
View Full Profile isn’t afraid of the big stage and he proved that Monday afternoon in dominating fashion in leading Clemson (7-3) to a 7-0 victory over No. 5 South Carolina (7-3) at Carolina Stadium in giving Clemson the series win over their arch-rivals for the first time since 2010.

"I'm just really excited about how we played tonight," Clemson head coach Jack Leggett said. "We played really well tonight. Brody Koerner was outstanding on the mound. Been coming down here a long time and I don't think I ever seen anybody go from start to finish as in command as he was. He had a great pace to his game. I thought we played really well offensively - putting together some innings, got some situational hits when we needed them. We ran the bases well and played really good defense. We put together what I would consider a complete game tonight against a good team. Good series. Both good teams. We just happened to play a little bit better tonight. I'm real proud of our kids."

Koerner was electric from the start and he wound up pitching the complete game, giving up just four hits, walking three and striking out six. He threw 116 pitches, 72 for strikes, and didn’t allow a South Carolina runner to reach second base until the sixth inning.

"I like the way we have been playing. I think we are a good baseball team," Leggett said ."We were very focused tonight, very locked in, very confident. We had three good games in the series as they are always are. We happen to play just a little bit better this time around. I am just proud of our kids. They have been working hard. They deserve it. I think we got a good baseball team."

Chase Pinder
Infielder
# 6-0, 165
Poquoson, VA
View Full Profile reached first on a throwing error by the shortstop with two outs. Pinder moved to second on a single up the middle by Andrew Cox

Back-to-back one-out singles in the third by Krieger and Duggar put runners on first and second but a wild pitch allowed both runners to move up a station. Okey promptly hit a sacrifice fly to right field, plating Krieger from third, extending Clemson’s lead to 2-0 over South Carolina.

South Carolina’s best chance to score came in the sixth inning when Gene Cone led off the inning with a walk and advanced to second on a Elliott Caldwell single to center – marking the first time the Gamecocks had a runner on second base. Cone advanced to third when Max Schrock hit into a double play, however, the inning ended on a swinging strike out by Kyle Martin.

"Their good hitters made plays and our good hitters couldn't do much and you got to credit their pitching staff," South Carolina head coach Chad Holbrook said. "They outplayed us today. We will go back to the drawing board and try to get better."

Rohlman worked a three-two count into a single to left with one in the seventh and advanced to third on an infield single by Krieger. Duggar fouled off four consecutive pitches before finding a hole in left center for a double and scoring Rohlman. After a pitching change Okey grounded out for the second out of the inning but Krieger was able to make it home from third and Duggar moved to third on the out before scoring on a wild pitch giving Clemson a 5-0 lead over South Carolina.

The Tigers added some insurance in the top of the ninth, taking advantage of South Carolina mistakes. Slaton was hit by a pitch, stole second and came home to score on an RBI double by Rohlman. Rohlman promptly stole third and scored on a throwing error by the catcher.

Leggett said Koerner deserved a chance to come back in the bottom of the inning to try to finish the Gamecocks off.

"He is in such great shape and I knew he had an extra day off as well," Leggett said. "He deserved a chance to finish that thing off. He started it in such great fashion and had a great middle of it. He didn't show any signs of weakness at all. If he had, we had other guys ready to go, but he did a great job tonight."