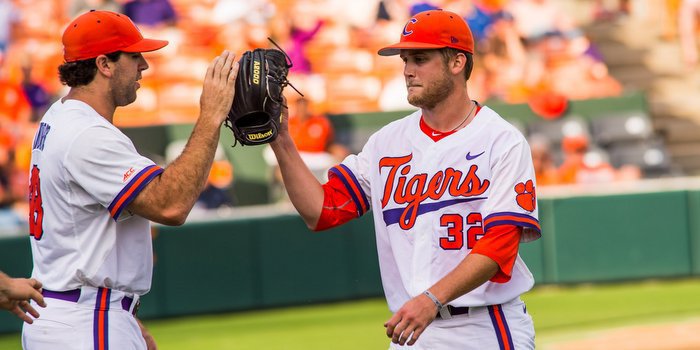 CLEMSON – The home portion of the regular season is over.

Clemson had won the first 17 games of the series before the Buccaneers defeated the Tigers 4-3 in 10 innings on April 8, 2015, at Clemson. Clemson improves to 35-18 with the win while Charleston Southern falls to 18-32 with the loss.

The Tigers scored in the bottom of the second. Reed Rohlman walked with one out, and he moved to second on a single by Chris Williams. Mike Triller reached on a fielder’s choice that forced Williams but moved Rohlman, and Rohlman scored on a single to center by Andrew Cox for the 1-0 lead.

Senior Clate Schmidt got the start for the Tigers, pitching two scoreless innings. He was followed in succession by Alex Schnell, Garrett Lovorn, Andrew Papp, Patrick Andrews, Alex Bostic, Brooks Crawford and Alex Eubanks. Eubanks got out of a jam with two runners on in the eighth.

The Tigers managed just two hits through the first seven innings but struck again in the eighth. Seth Beer walked to lead off the inning and he was replaced by pinch-runner K.J. Bryant. Bryant stole second and Okey doubled over the center fielder’s head, scoring Bryant for the 2-0 lead.

Rohlman grounded out to move Okey over to third, and Williams walked on a 3-2 count to put runners at the corners with one out. Pinch-hitter Robert Jolly smashed a liner at the short, who got the force at second for the out. However, the throw to first was bounced and Jolly was safe, allowing Okey to score for the 3-0 lead.

The Buccaneers scored twice in the ninth off of Alex Eubanks to account for the final score. Schmidt earned the win to improve to 6-4, while Eubanks picked up his third save.

The Tigers travel to South Bend Thursday for the start of a critical three-game series against Notre Dame. The Irish are 27-14 overall and 11-14 in the ACC but are 14-9 at home. The Tigers currently sit sixth in the Atlantic Coast Conference standings, and finishing sixth guarantees Clemson would miss the ACC Tournament’s play-in game next Tuesday.

Thursday and Friday’s games are scheduled for a 6:05 p.m. start. Saturday’s series finale is scheduled to start at 1:05 p.m. The Irish have lost 12 of their last 16 games, including four of their last five.

The ACC baseball tourney starts on May 24th (a week from Tuesday) and runs through the following Sunday. The tournament will be played at Durham Bulls Athletic Park in Durham, N.C.

The remaining teams will be seeded (three through ten) based on winning percentage in overall Conference competition without regard to division. All ties will be broken using the tie-breaking provisions.