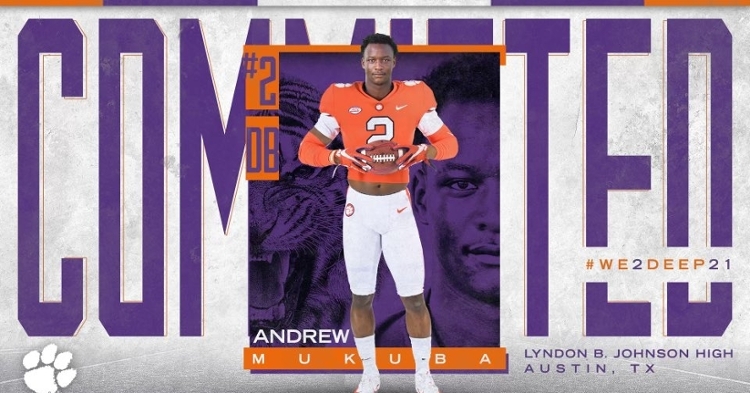 Mukuba said he has known Clemson was his destination for a while.

Last week’s announcement was a mere formality for 4-star safety Andrew Mukuba as there was never much doubt in his mind he would be a Clemson Tiger.

The seventh-ranked safety in the country out of Austin (TX) LBJ held over 30 offers and chose Clemson over the hometown Texas Longhorns.

Mukuba’s recruitment was different than what he expected without the ability to take visits to his finalists due to the NCAA’s COVID-19 dead period, but despite never stepping foot on Clemson’s campus, he was still 100-percent sure Clemson is where he wants to spend his college career.

“I feel like I've known that for a while. I knew it was Clemson the whole time, but I didn't want to say that because the Crystal Ball predictions would start popping up all the time,” Mukuba told TigerNet. “It wasn't really hard because the virtual visits and the virtual tours really helped. It wasn't hard for me at all because Clemson is one of the most known universities. After all of the stuff I saw on Google, it was cool to me, so it didn't really bother me that I haven't stepped foot on campus. They just showed me around campus, around the facilities and stuff like that. They showed the things they do with academics. That was nice that they were able to do that with me.”

The relationship with the coaching staff – especially defensive coordinator Brent Venables – set Clemson apart from his other suitors.

“The big thing to me was the relationships, the honesty in the talks that I had with Coach Venables,” Mukuba said. “If I'm having the kind of talks, I had with Coach Venables, it doesn't get any better than that, so I knew it was the right place for me. The fact that I'm the only focus they had in for 2021 was a big eye-opener for me because I feel like they think I can come in and make an impact as a true freshman.”

Venables was the first one to learn of Mukuba’s decision.

“I told Coach Venables first. It was fun. He said he was jumping up and down,” he said. “He was really pumped. Then I got to Coach Swinney and Coach Conn. They were all pumped up – Coach (Todd) Bates and Coach (Mike) Reed and Coach X (Xavier Brewer).”

Family was an important part of Mukuba’s decision, and he said it was easy for his loved ones to see that Clemson is where he belongs.

“Family is really important to me because I feel like those are the people who are going to love and support me through all of the hard times and good times,” he said. “They are always going to be in my corner whatever decision I make. They were happy with the decision and they feel like it's the right place for me. It came down to Texas and Clemson and Texas has a lot going on right now as a program. There are still questions that need to be answered about the Texas football program, so they felt like Clemson was just the right place for me.”

Mukuba was named the 2019 District 12-5A-I Offensive Newcomer of the Year and unanimous first-team AllDistrict. He totaled 50 tackles and 3 interceptions on defense, while adding in 1,200 yards receiving to go along with 15 total touchdowns. He picked off a pass and caught a TD in LBJ Austin's season opener recently.