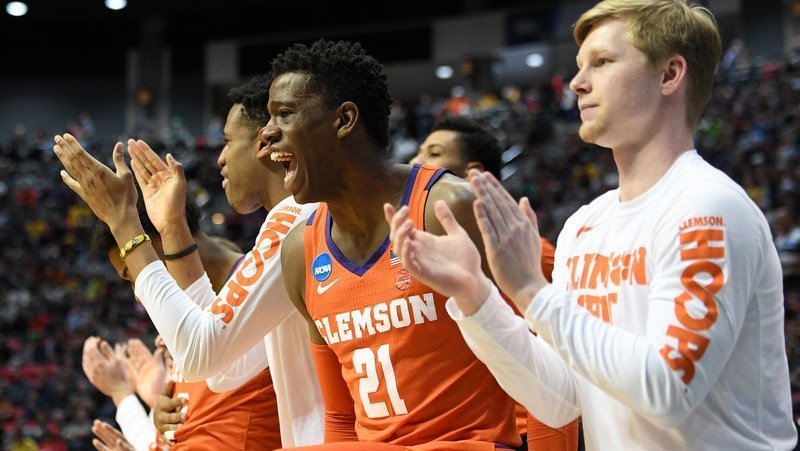 SAN DIEGO, CA – Clemson will be a part of big Sweet 16 party in Omaha next week.

The margin of victory was the largest in a 4-5 game in the history of the NCAA Tournament – the previous high was 24 points. The win for Clemson came on Auburn head coach Bruce Pearl’s birthday.

This is the first time Clemson has reached the Sweet 16 since the 1997 tournament when a Tigers team coached by Rick Barnes reached the mark with wins over Miami (OH) and Tulsa. Clemson is now 2-0 against Auburn in the postseason. Clemson has advanced to the Sweet 16 now four times in program history, and the Elite Eight just once (1980).

Clemson is 4-0 against the SEC this season has won five consecutive games over the SEC the last two seasons.

"Obviously, just so proud of my team to play as well as we did on this stage," head coach Brad Brownell said. "Not surprising because we've played well here lately and we have good players. These guys have really done an unbelievable job all year of buying into what we're trying to do.

"I just thought our focus and preparation the week leading into the ACC tournament and then this week has just been really, really good. Some of that's because we have older guys that really, you know, believe in what we're doing. We talked about that at the beginning of the year. I thought this team could be really, good; and the way we played out here in San Diego was extremely high level. Super happy for our team, our fans, and looking forward to our next game."

"Dominating performance by Clemson. They played great," Pearl said. "They have been playing really well. They've got great guard play. Thomas is a factor. They're extremely well-coached. They were very well prepared. They dominated us."

Auburn jumped out to a 7-6 lead in the first four minutes, but had trouble connecting from the field after that. Auburn was 3-of-7 from the field to start the game, but hit just 3-of-26 over the final 16 minutes of the half.

Auburn wouldn’t hit a field goal the rest of the half and Clemson finished the half on a 25-4 run. That included a 21-2 run that saw Clemson’s passing game – especially from the perimeter into the lane – make a difference. Auburn didn’t score another point until there was 2:35 left before halftime, and those two points came on free throws. Auburn cut the lead to 20 at 39-19 with 1:20 to play before the half, but Elijah Thomas hit a layup and Mitchell found David Skara in the lane for an easy bucket as Clemson led 43-19 at intermission.

Marcquise Reed and DeVoe each said Clemson made a statement with the win.

"I think it's a statement game," Reed said. "I think we showed how hard we can compete defensively. I think it's a real good game for us moving forward."

"It was just going out and competing for 40 minutes. Felt like we didn't let up at all," DeVoe said. "I think in the first half we had 15 stops in a row, I think. Going out and sticking to the game plan and competing defensively on every possession."

Clemson opened the second half with a DeVoe 3-pointer, but Auburn answered with a 3-pointer for their first goal since the 10:33 mark of the first half. Clemson answered that with an 8-0 run that featured two 3-pointers by DeVoe and a layup by Thomas that pushed Clemson’s lead to 54-22 with just over 16 minutes to play.

Clemson pushed the lead to as many as 41 and Auburn never threatened after the first few minutes of the second half.

"Yeah, I don't know about, you know, a major statement or anything like that," Brownell said. "I just think we have a good program. We have good players. We do things the right way. We have a first-class facility and we have a great university.

"It's an unbelievable statement I guess, if you will, to recruits and folks of that nature that maybe haven't examined us quite as well. But as much as anything I'm happy for our players. Our players, the amount of time they put in and certainly guys like Donte Grantham and Gabe DeVoe, two seniors that have been with me for so long. We've had to do some things. We were out of our building for 20 months and we had to make sacrifices to help get to this point. But I guess in some ways it does show that you can achieve big things at Clemson."