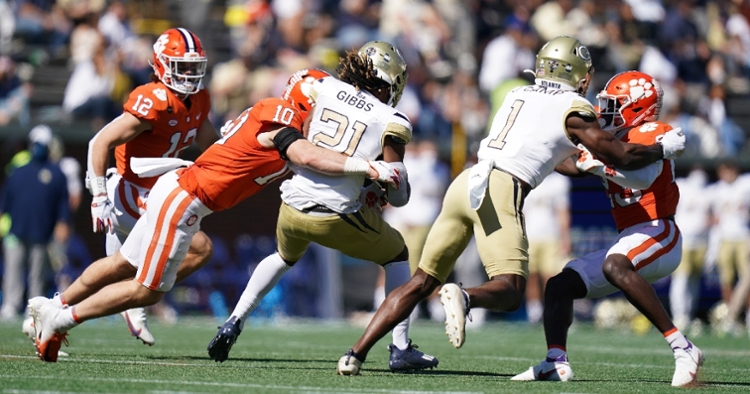 With a noon kickoff at Georgia Tech, Clemson showed up in Atlanta late Friday and it was go time early Saturday. Not only did the Tigers’ defense show up, they showed out in a 73-7 demolition of the Yellow Jackets at Bobby Dodd Stadium.

Clemson’s defense held Georgia Tech to just 204 total yards – 81 yards through the air and 123 yard on the ground – while creating three turnovers. The defense had 12 tackles for loss and five sacks on the day.

It was the first time this season Georgia Tech didn’t gain at least 400 yards of total offense.

After handling No. 7 Miami the week before in a primetime game, defensive coordinator Brent Venables said his guys showed up to work with the right mentality, even putting in extra work right up until game time.

“You've got to have the right kind of mindset - the windshield mentality starting over again next week,” Venables said after Saturday’s game. “That's really what you want to see with an early start coming on the road. You've got a show and go. Every guy was in there early. We actually give them a break after breakfast where they can go back to their room and finish getting ready and every guy came down to breakfast ready with their bags packed. They were ready to go and they watched tape and put in a little extra time doing that, so that shows a real commitment and focus and good leadership and a hunger. It's hard to coach that to have the hunger.”

Showing up every week with a determination to be great is difficult, but that’s exactly what Venables has seen from his defensive players no matter the circumstance.

“Our guys will do what you want them to do, but you'd rather them be excited about doing it with their hearts in it and their minds in it for the right reasons and understand that commitment,” Venables said. “Being good is hard. Playing this game is hard. It will punish you for the smallest things, but one to overcome all of that is being above and beyond in regards to being prepared with a game plan - really having the details down. We had kind of a short week with a late game a week ago after back-to-back night games and that can strain you a little bit. Our guys really responded very well. Our coaches did a great job having our guys ready to play.”

Clemson’s defense showed up in Atlanta determined to stop whatever Georgia Tech threw at them, creating turnovers and wreaking havoc along the way. In other words – playing Clemson defense.

“We've been pretty solid so far this year at creating turnovers and responding...I was really proud of guys coming out and responding to an early turnover by the offense, having the right mindset, going on the road, early morning game,” Venables said. “I think the first couple of drives, there were two three-and-outs and just setting the tempo. They came back and responded and there were no excuses. It was a good, strong, tough mindset that we control what we control. Early in the game, we really created some momentum. We were able to get into a good rhythm. We had some fourth down stops, which to me are like turnovers. They're giving up field position. That's how you start to develop an identity and a mindset. No smoke and mirrors, just good, fundamental tough, physical football and being what we're supposed to be and playing disciplined football. Those are some of my favorite plays.”

Georgia Tech receiver Jalen Camp got behind cornerback Mario Goodrich for a 59-yard touchdown, the only mark on the day. However, Venables liked how his group responded and set the tone for the rest of the game.

“We get into third-and-10 and get behind the pressure and they dump to the back in the flat. We should be in Cover 2 there and we're not,” he said. “Then we turnaround after the conversion and give up a 60-yard touchdown. We let them get behind us and we can't do that. The first play of the game, they had a RPO and double moves on us. I think they fumbled the ball, but I think we were in pretty good position. We knew they would come in with a lot of play action and double moves and try to max protect and attack us outside. We've got to do a better job there and clean up some fundamentals and positioning.

“After that, we really responded well and got into a good rhythm for most of the afternoon. Offense and defense did a great job of complimenting one another. We got to play a bunch of guys again and that's really helping to grow our defense, the morale, chemistry and belief in one another.”