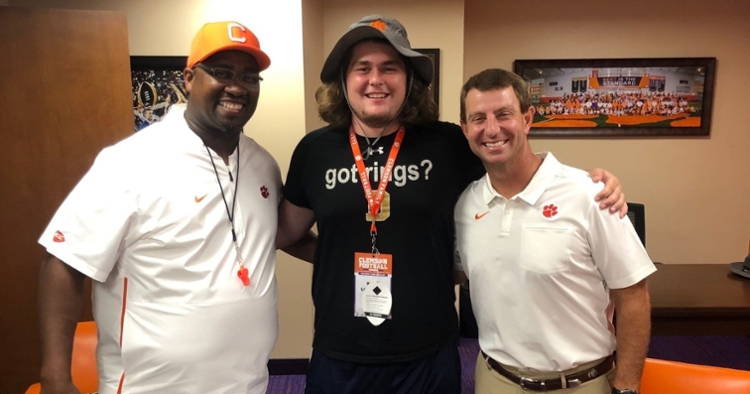 Bresee is the top-ranked defensive lineman for the 2020 class, so who better to ask to about his counterpart on the offensive line?

With Damascus is a relatively small town in Maryland, Bresee said it’s special to have two major college football prospects heading to the same university.

“It's awesome. Our little town here in Damascus, I don't think there's another school with two Clemson commits in it,” Bresee told TigerNet Monday afternoon. “Just to have that and Ryan is one of my good friends. Knowing that he'll be coming behind me and that I'll have somebody, even though I know I'll make good friends there, having somebody behind me who knows home is really cool.”

Linthicum’s commitment didn’t really come as a surprise to Bresee.

“I've known for a good while. I've always known that Clemson was his top choice,” Bresee said. “After the visit this weekend, he kind of told me when I went home that he was going to commit pretty soon. He told me that on the way there, but I was like, 'Ok, we'll see.' I didn't believe him, but he called Coach (Swinney) last night and let him know.”

When Bresee plays defensive tackle, he lines up across from Linthicum at practice and he said Clemson is getting an athletic, aggressive center.

“I think Ryan is playing center in college. Ryan is a big, athletic, mean offensive lineman,” Bresee said of Linthicum. “He blocks until the whistle and does what he has to do. He's really patient as an offensive lineman. I think he moves well laterally, which you don't normally see from a guy his size. He's a basketball player so he's really athletic for especially a center who normally doesn't have to move too much. He's an athlete.”

The best offensive linemen tend to have a mean streak and Bresee that’s definitely a quality Linthicum possesses.

“Ryan always blocks until the whistle. Sometimes he gets in trouble for it but he definitely has that mean streak in him,” he said.

Off the field, Linthicum is known for his sense of humor.

“He's super funny. He's hilarious,” Bresee said. “I think that's the one trait everyone knows about him. He's really goofy but once it's time to play, he gets really serious, though.”

Had an amazing vist to Clemson this Weekend !!! Can’t wait to be back!! #ALLIN pic.twitter.com/054qYFBQlp

Great Day to be a CLEMSON Tiger?? #WE2DEEP20 #ALLIN