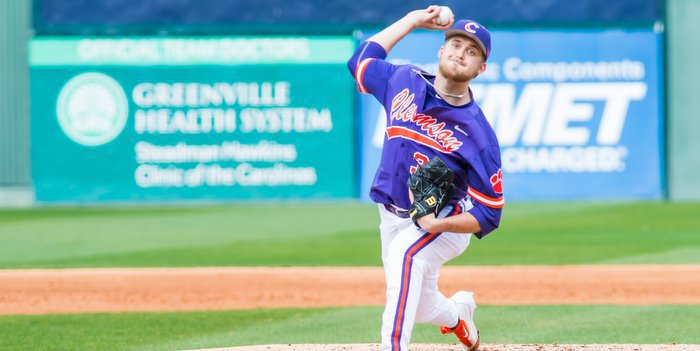 Schmidt earned his third win in the victory. (Photos by David Grooms)

Clate Schmidt put together a quality start and Chris Okey hit a two-run triple as Clemson (7-2) defeated No. 13 South Carolina (10-1) 5-0 Saturday afternoon in front a record crowd of 7,216 fans at Fluor Field, evening the Reedy River Rivalry at a game apiece.

The rubber match of the series will be Sunday at 2 p.m. at Doug Kingsmore Stadium.

With a new lineup in place, the Tigers struck for a run off South Carolina starter Braden Webb in the bottom of the first. Reed Rohlman, hitting second, doubled off the left field wall with one out, and he moved to third on walks to Eli White and Weston Wilson. That brought up Chris Okey – hitting sixth for the first time this season – and he coaxed a 3-2 walk from Webb that forced in Rohlman for a 1-0 lead.

The Tigers added to the lead in the bottom of the second. Pinder tripled to center with two out – South Carolina’s center fielder turned around three times before letting the ball hit the base of the wall – and Pinder scored when Rohlman reached on an error. Rohlman hit a ball that was headed for right field, but Gamecock second baseman L.T. Tolbert made a diving stop. However, Tolbert’s throw was wide of first and Clemson had a 2-0 lead.

The Tigers continued to get runners on base against Webb, but didn’t score again until the fifth. Beer walked with one out, and Wilson reached on an error by the first baseman that put runners at second and third with one out. Okey tripled to deep right-center on a 2-2 pitch, plating both Beer and Wilson for a 4-0 lead.

"I think he was trying to come after me with a breaking ball," Okey said. "He has a really good one and he beat me with it. I threw all my chips in and guessed right and put a good swing on it and let it go and got two runs."

Schmidt was on top of his game through the game’s first five innings, allowing two walks and no hits as he breezed through the first frames. He ran into trouble in the sixth. Dom Thompson-Williams walked with one out, and Jonah Bride followed that with a double that one-hopped the wall in left. Schmidt then walked to load the bases, and Schmidt’s day was done after 83 pitches.

At that point Monte Lee brought in lefty Pat Krall to face Alex Destino, who was on base five times in South Carolina’s Friday night win. Krall got behind Destino but struck him out swinging on a 2-2 pitch for the second out. Krall then fell behind catcher Chris Cullen – three balls and a strike – before inducing two foul balls. With the runners moving on a 3-2 pitch, Cullen struck out looking on 3-2 fastball on the inside part of the plate to end the threat.

Schmidt (3-0) went 5 1/3 innings, giving up just one hit and no runs while walking four and striking out six in picking up the win.

Pinder added to the lead on the first pitch of the bottom of the sixth. Pinder greeted reliever Brandon Murray’s first pitch rudely, depositing it high over the Green Monster in left and off of the New York Life Building for his fourth home run of the season. The Tigers were unable to add to the lead and led 5-0 through six innings.

Krall earned his first save by pitching the final 3 2/3 innings, giving up just one hit and striking out four, and Lee said both pitchers were worthy of praise.

"It all started with Clate Schmidt. When we needed a big start from a veteran pitcher we got one in Clate today," Lee said. "He did an unbelievable job. And how about Pat Krall? Pat Krall comes in with the bases loaded to face Destino - who is an extremely hot hitter - and got a big strikeout right there. And then he struck out Cullen to finish that inning right there and put up a zero. Destino at the time represented the tying run, and then Pat took it the rest of the way. I thought the two guys who pitched today did an unbelievable job."

"Clate was phenomenal I thought with the way that he performed," Holbrook said. "What a great that kid's story is. He is an inspiration to a lot of people and I have to tip my cap to him with all that he's been through and the way that he performed. It was certainly impressive. We got off to a good start this season but we didn't play a good baseball game today from a defensive standpoint. We just couldn't muster much offense against their pitcher. You have to give credit to the other team when you get your tail kicked like we just got our tails kicked."

Dabo Swinney on his philosophy with the transfer portal
Post your comments! 2k® kelley21® boykinlp Clemalum07