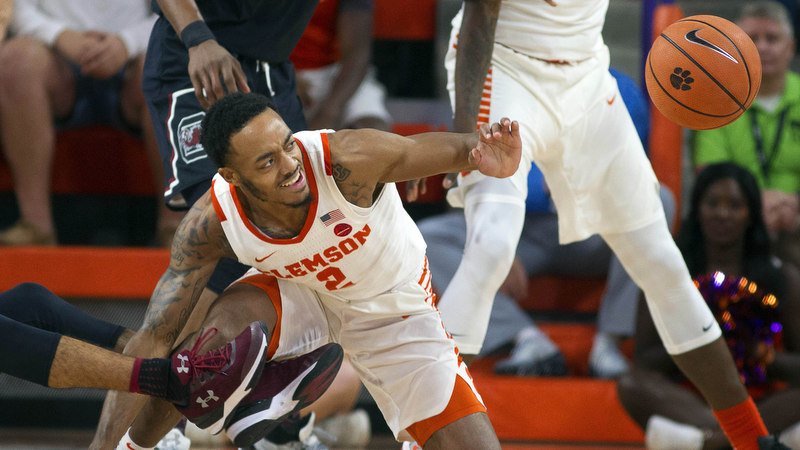 Reed scrambles for a loose ball in the first half (Photo by Joshua S. Kelly, USAT)

CLEMSON – Things got so out of hand in the second half that Clemson fans started chanting “little brother” at South Carolina players and the few fans left in the building.

Clemson went over and under and through South Carolina Tuesday night and Marcquise Reed scored a game-high and career-high 25 points, powering the Tigers past the outmanned Gamecocks 64-48 in Littlejohn Coliseum, improving to 10-1 on the season and winning over their rival for the second year in a row.

It was the largest margin of victory for Clemson over South Carolina since 2006 (74-53). The last time South Carolina failed to score 50 or more was in February of 2015 against No. 1 Kentucky.

“Really kind of a workman-like performance,” said Brownell. “Playing South Carolina you know it’s going to be physical. You know they’re going to get after you defensively. I thought our guys matched that intensity level. I’m pleased because this is a highly emotional game. We played 40 minutes of man to man, they buckled their chinstraps on and I think we made adjustments that helped keep them at bay.”

Reed said the Tigers are balanced offensively, making it hard for other teams to concentrate on just one player.

“We know all five of us can go off any night so our chemistry is definitely building fast," said Reed. “We trust each other to make plays and it just makes the game easier.”

The Tigers started strong in the first half of the contest, getting a 3-pointer from Donte Grantham to open the scoring. A David Skaara 3-pointer a few minutes later gave the Tigers an 8-4 lead, and when Gabe DeVoe hit two free throws with just over 11 minutes remaining in the half Clemson had its biggest lead at 17-8.

The Gamecocks battled back, however, going on an 11-2 run over the next six minutes that tied the score at 19-19. Clemson led 31-26 at intermission.

The teams started the second half as ragged as the first half ended, the first five minutes showing Clemson with the same five-point advantage it had at the half at 33-28. However, DeVoe hit a quick layup and Thomas followed a few seconds later with another inside play and the Gamecocks were forced to call a timeout trailing 37-28 with 14:23 to play.

The Gamecocks got a quick two from Chris Silva out of the timeout, but Eli Thomas grabbed a rebound on the Clemson end and flipped it to Marcquise Reed for a 3-pointer to push the lead to 40-30 and Thomas was part of a steal a few seconds later that led to a foul on the Gamecocks as the Tigers sprinted out on the fast break. The foul was called a flagrant foul (on Silva) but Thomas missed both free throws.

A few seconds later Reed hit a 3-pointer from the left key and Clemson had its biggest lead of the night at 43-32 with 11:34 to play.

A dunk by Mitchell and a 3-pointer from DeVoe pushed the Clemson advantage to 50-36 with 7:35 to play, but Hassani Gravett nailed a 3-pointer that made it 50-39. The 3-pointer was the first of the night for the Gamecocks, who had been 0-for-12 before the make. Reed turned around and hit a 3-pointer from the top of the key a minute later, however, and Clemson led 53-39 with just under six minutes to play.

South Carolina hit a layup over Grantham to make it 53-41, but Thomas slammed a pass from Grantham home that brought the crowd to its feet, and 20 seconds later DeVoe drove the length of the floor and kissed a shot off the glass that made it 57-41 with 4:24 to play, prompting another Gamecock timeout.

Reed followed the timeout – and a Gamecock miss – with a turnaround jumper from the key that made it 59-41 with 3:40 to play and essentially put the game out of reach as the fans began to chant “just like football.”

Notes: Clemson improves to 10-1 on the season … the win marks the second consecutive victory over South Carolina in the Palmetto Series Rivalry … the 48 points allowed to the Gamecocks was the lowest total in 21 years (39 points allowed in 1996) … it also marks the lowest point total for the Gamecocks since they scored 46 points against Florida on March 4, 2014 … the 22 points in the second half was the lowest point total all season for South Carolina in a single half of play … the win was head coach Brad Brownell’s 134th at Clemson (five shy of passing Oliver Purnell for third all-time in Clemson history) … Reed’s 25 points was a career-high … it was also his third 20-point game of the season and 16th of his career … the Tigers held South Carolina to its lowest 3-point field goal percentage of the season (12.5).

Clemson vs. South Carolina box
Comment on this story