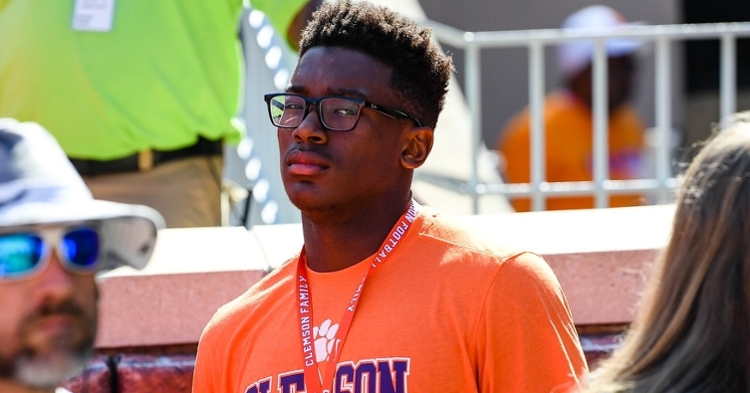 Carter visited Clemson last fall for the win over FSU.

Clemson's 2021 recruiting class announced Wednesday might have lacked the star power of having three of the nation’s top ten players like the 2020 class had, but it more than made it for it and top-to-bottom consistency and ready-made playmakers.

A total of 18 players had National Letters of Intent signings to play football at Clemson announced Wednesday. The early signing period will conclude on Friday, Dec. 18, prior to National Signing Day on Feb. 3, 2021.

I was asked on a recruiting call Wednesday which player I saw as the top “get” in the class and I didn’t hesitate in saying Barrett Carter, who is rated as a five-star prospect and a top-35 national prospect in the 2021 class by both Rivals (No. 21 overall) and the 247Sports Composite (No. 33).

“We’re going to use him in a versatile way,” Swinney said. “He’s not a guy you can kind of put in a box there. He absolutely can play linebacker, there’s no question about that. But we think he could play either safety, we think he could play nickel-SAM – I mean, he is as dynamic a guy as we’ve signed. And if you just watch him and what he’s done offensively as well – he’s fast, he’s got the size and the physicality to play in the box, but he’s got the speed and coverage ability and range to play on the back end.”

Could Carter see the field early in his Clemson career? Corners coach Mike Reed thinks so, saying that opponents will have to find a way to scheme against the 6-foot-1, 220-pounder.

“He’s a guy that teams are going to have to scheme against,” Reed said. “As Coach (Swinney) alluded to, he’s very dynamic, can do a lot. When you have a guy like that, it’s one of those kind of kids you have to be accountable for on every play. You never know where he’s going to line up. I mean, heck, he even played quarterback this year and did a heck of a job as a quarterback, and a running back. So, those type of athletes in our defensive scheme will allow us to do a lot of things.”

In other words, Carter is the kind of defender who will be on the field for all three downs, regardless of the offensive personnel grouping.

“I think again, just his versatility, it’s hard to just kind of pencil him in. He’s one of those guys we’ll figure out, like an Isaiah Simmons. We’ll figure him out as we go, but you’ll see him do a lot of different things throughout his career.”

Another player to watch out for is Will Taylor, the quarterback out of Dutch Fork who will also play baseball for Monte Lee. Swinney says Taylor has the wheels to play wide receiver but will start out learning the quarterback position.

"He's a winner, No. 1. High-character kid. Goes back to a couple of years ago in camp. He was working QB,” Swinney said. “He's not quite as big as you'd like in a quarterback. But I really wanted to see him as a receiver, so I put him at wideout in camp and wanted to see how natural it was. It took about two minutes. First of all, he can fly. His acceleration makes him special. His lateral quickness and vertical acceleration. And he's got natural ball skills. Very confident kid.

"The big thing for me watching him was realizing he could legitimately play QB for us. In this world we're in now, in the transfer portal era, I've had Will in my mind for a while. We are going to train him as a QB in the first year, but move him to wideout. I think he has a chance to be elite at receiver. But he will have the foundation of being a quarterback in place."

North Carolina running back Will Shipley has drawn comparisons to Carolina Panthers running back Christian McCaffrey. Swinney was asked if Shipley compares to any player he’s coached.

"Not really. Not that I've coached. The only kid that jumps out is maybe the McCaffrey kid,” Swinney said. “Similar in he's powerful, fast, dynamic. Nothing he can't do. And he's big. He has a rare combination of size and speed. I haven't had a guy like him with that size to this point, so he's pretty unique."

"Zaire transitioning to football full-time and giving up the hoops dreams, he's realized his future is with football,” Swinney said. “Quarantine has been good to him. First time we saw him, he was 205 pounds. Now he's 240-plus. Big-time athlete."