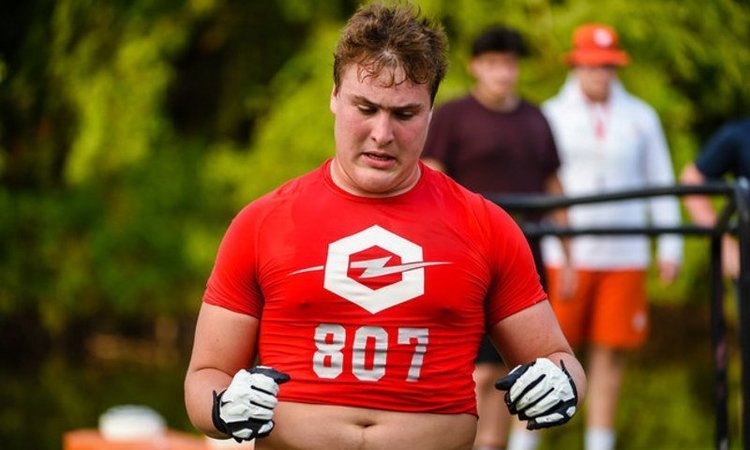 Clemson had two offensive linemen drafted in this year’s NFL Draft, with John Simpson and Tremayne Anchrum finding new homes in the league. With a few others signing rookie free agent deals, Clemson is in a position to pitch NFL dreams to high school recruits.

Robbie Caldwell and the Clemson staff is hoping to make that pitch successfully to the No. 1 player in Kentucky, Jager Burton. The 6-4, 270-pound offensive lineman from Frederick Douglass HS (Lexington, KY) included Clemson in a list of finalists recently, and TigerNet caught up with Burton to get the scoop on where Clemson currently stands in his recruitment.

Clemson is looking to reload the offensive line this recruiting cycle, and Burton is a big piece to that. Burton has been in touch with Clemson offensive line coach Robbie Caldwell regularly, and the staff is patiently waiting on their chance to get the 4-star back on campus.

“I talk to Coach Caldwell almost every day,” Burton told TigerNet. “It’s mostly just that there’s no rush and wait for the virus to be over and get me back on campus. And let us show you why you should come here.”

Burton’s high school teammate, Walker Parks, is a part of the 2020 recruiting class for Clemson. What stands out to Burton about Clemson in making them a contender to reunite the two linemen?

“I would say the fact that Walker is going there helps,” he said. “I talk to Walker about it a lot and I also talk to Ryan Linthicum and Cade Denhoff. You are going to get to play for a national championship at Clemson. Clemson is exactly how it’s portrayed. A lot of people think that with Coach Swinney it’s a fake persona, but it’s all real. They’re all extremely nice people. They’re one of the few schools that want you to make the best decision for you, and if it’s not them, they completely understand and still rooting for you. So that’s cool for coaches to be understanding about that.”

Burton is planning on taking an official visit to Clemson and possibly attending Dabo Swinney’s All In Cookout. If unable to make his official visits because of COVID-19, Burton could possibly commit before the start of your senior season of high school football. Burton has visited Clemson a few times already, with his offer coming from Clemson after attending a Dabo Swinney football camp. What was Burton’s impression of Coach Swinney and the Clemson campus?

“Coach Swinney was the one who offered me after camp,” he said. “It was an awesome moment. He seems like a great guy on and off the field. I went to the NC State game, I went to a game last year and I went to the camp. The facilities are amazing. I got to be up on the hill when they ran down so that was awesome, just to be up where the students are for a little bit. The fans are ride or die, so that’s awesome.”

Burton has primarily played tackle in high school, but he has the ability to play any position on the offensive line. What are Burton’s strengths as a player? And what has Clemson and other schools said to Burton about his position at the next level?

“A lot of people talk about my athleticism and my ability to play all the positions on the line,” he said. “No one is perfect so I still have a lot of things to work on, but I feel like that’s the main thing people tell me. Just my athleticism and being nasty and finishing blocks. I think I’m going to play guard if I go to Clemson. Alabama said they can see me as a tackle. Mostly everywhere else wants me to play guard. And a few places where I have a really good opportunity to play early, like Kentucky, said they might use me the first year at center because they’re losing their center.”

Burton’s hometown of Lexington, Kentucky has produced some dominant offensive lineman in the past few years. Along with Burton and his high school teammate, Walker Parks, Lexington is the home of this year’s 10th overall NFL draft pick to the Cleveland Browns, Jedrick Wills. When drawing comparisons to players in college and the NFL, Burton has heard his named mention alongside the former Alabama Crimson Tide and now Cleveland Browns lineman.

“Jedrick Wills that just got drafted last night 10th overall, he’s from Lexington,” Burton said. “We text all the time. I remember when I was in middle school, that’s who everyone was talking about. Everyone would go to their games just to watch him. I got to high school and it’s kind of been like that for me, and I feel like our game is a lot alike. A lot of people compare me and Walker to Jedrick and Logan Stenberg. A lot of people say Walker is like Logan and I’m like Jed.”

Burton has released a top-5 schools of Clemson, Alabama, Kentucky, Ohio State and Oregon. What was it about those five schools that made them finalists? And what is he looking for in the school he will call home?

“Those five schools checked the most boxes for me and my parents,” he said. “A couple of those schools, I just felt so comfortable with those coaches so I felt like it won’t be hard to adjust there. I’m mostly just looking for a place that I’m comfortable at -- because at the end of the day, it’s me that has to be there for the next 3-4 years and I’ll have to live with the decision I make for the rest of my life. It’s mostly just me trusting the coaches and knowing they are going to do what they’re telling me they’re going to do. And to help me get to my overall dream of playing in the NFL. So whichever place I feel like is going to help me the most getting there and that I feel is going to follow through on what they’re telling me is the place I’m going to end up going.”

Burton has been working hard to get his body in the best possible shape to be ready to contribute early in college. Burton is currently maxing out at 315 on bench press, 430 pounds on squat and 300 on power clean. Weighing in around 270 pounds, Burton has focused on putting on good weight in hopes of playing college football around 280-290 pounds.