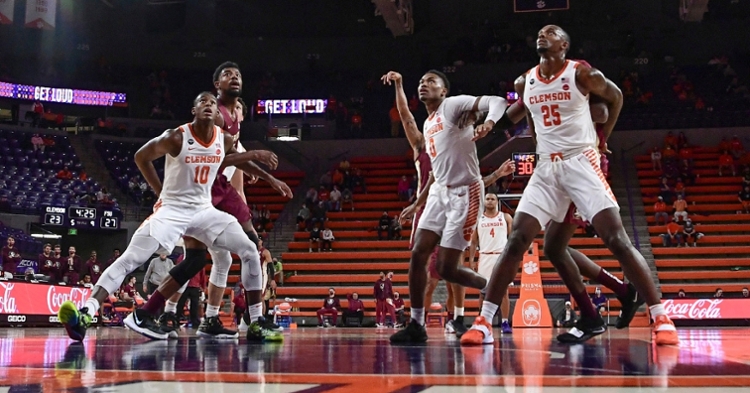 CLEMSON – Nick Honor shook off a scoreless first half and scored 13 points in the second half as Clemson defeated No. 18 Florida State 77-67 at Littlejohn Coliseum Tuesday night.

The Tigers outscored Florida State 48-33 in the second half. Clyde Trapp was Clemson’s leading scorer with 15 points, Honor added his 15 and Al-Amir Dawes added 11. Clemson was 24-of-33 from the free-throw line (73 percent), while Florida State was 6-of-9 from the charity stripe. The Tigers outrebounded Florida St. 49-35, including 19 offensive rebounds.

The game was tied at 54-54 with just over seven minutes remaining, but the Tigers outscored the Seminoles 23-13 the rest of the way.

"In the second half, we played about as well as we could play. We made shots, and we made one or two small adjustments at halftime that helped," head coach Brad Brownell said. "There was wearying effect to our defense. We attacked in transition and pressed. We got defensive rebounds and got out ahead of Florida State. We played downhill as much as possible, and it worked today."

Brownell lauded the efforts of Honor and Trapp.

"Nick's [Honor] pace of play is outstanding, and so is his ability to push," Brownell said. "We have tremendous confidence in him as a player. You've got to trust that he's going to get going and start making shots. Al [-Amir Dawes] and Clyde [Trapp] gave us great energy on both ends of the floor and played really well."

The Seminoles led by as many as nine in the first half. It was Clemson that opened the scoring, however, on a dunk by Clyde Trapp 90 seconds into the game. Florida State didn’t score until almost five minutes had elapsed but trailed just 4-2 after a layup by Rayquan Evans.

The teams traded baskets and the lead for most of the next nine minutes, but the Noles started to pull away with three minutes remaining and led 34-29 at intermission.

Balsa Koprivica started the second half with a dunk that opened the Florida State lead to 36-29, but the Tigers reeled off eight straight points to take a lead. Al-Amir Dawes nailed a 3-pointer to start the run, and then Trapp hit a free throw and a layup that made it 36-35. Dawes ended the run with a jumper that gave the Tigers a 37-36 lead.

Trash talking ensued as the game became more physical, and the teams traded baskets over the next few minutes and entered the under-12 media timeout with the game tied at 47-47. The teams were tied at 54-54 when John Newman penetrated the lane and flipped a pass out to Nick Honor, who drained the 3-pointer from the wing for a 57-54 lead. Newman followed that with a left-handed layup off the glass, and Honor stole the ball off the inbounds and was fouled. He hit a free throw and Clemson led 60-54 with just over six minutes remaining.

The Tigers led 66-60 when Honor tossed a pass to Simms, who was wide open in the corner. His 3-pointer bounced off the side of the rim, but Simms followed his shot and hit a runner in the lane that made it 68-60. The Tigers forced a missed shot on the defensive end, but Newman threw the ball to Scottie Barnes, who hit a shot in the lane that made it 68-62 with 3:10 left on the clock.

It didn’t take long for Clemson to answer, however, as Honor nailed a 3-pointer from the right corner to give the Tigers a 71-62 lead with just 2:39 to play. The Seminoles missed a shot on the ensuing possession, and Raiquan Gray fouled Jonathan Baehre with 2:24 left to play.

Baehre missed both free throws and Anthony Polite hit a 3-pointer from the corner, making it 71-65 with just 1:44 to play. The Tigers ran the shot clock down and Trapp hit a jumper from just inside the 3-point line for a 73-65 lead, and after the Seminoles missed a 3-pointer on the other end, Trapp rebounded the miss and shot a pass to Honor, who was fouled on the dribble. Honor hit both free throws and the Tigers led 75-65 with 55 seconds on the game clock.

The Tigers were able to run out the game clock and secure the victory. Clemson returns to action Saturday at 2 pm against the Hurricanes in Miami.

??@_JayRock15 in transition ? @NickHonor3 with the backcourt steal to extend our lead ??