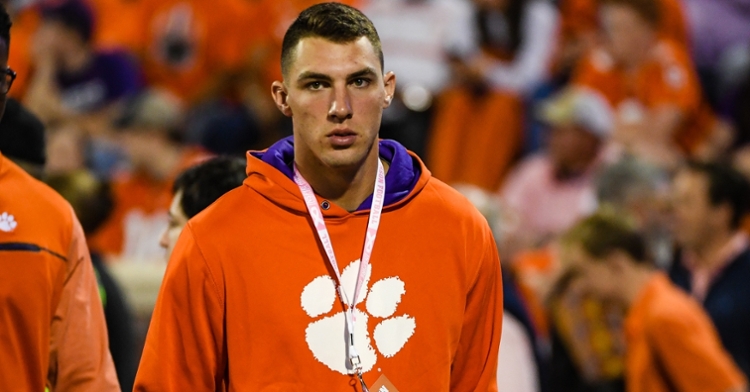 Denhoff says the Clemson culture is what stood out in his recruitment.

Clemson head coach Dabo Swinney promised Clemson fans that the last decade would be the best in Tiger history, and he told new defensive end commit Cade Denhoff that he wants the next decade to be among the best in college football history.

Denhoff, a 2021 4-star prospect out of Lakeland (FL) Lakeland Christian committed to the Tigers Sunday morning, and a conversation with Clemson’s head coach stood out.

“The photoshoot was fun, but it was fun listening to Coach Swinney and hearing his vision for the program. That was the most fun part,” Denhoff said. “He said the previous decade was one of the best in college history, not the best, and he said he wanted the next decade to be even better. It makes you realize that this is a program focused on winning games and while you are there you might be a one or two-time National Champion. That is exciting.”

This weekend’s visit was his fourth to Clemson since receiving an offer back in July. Denhoff (6-5, 225) previously had a final group of Clemson, Alabama, LSU, Nebraska, Ohio State, Penn State, and Virginia. However, Clemson was the school that began to stand out.

“I really got it into my mind I wanted to commit to Clemson in early January, and I talked to Coach (Lemanski) Hall the defensive ends coach and I told him that Clemson was the place I wanted to go and that I was done taking visits,” Denhoff told TigerNet. “I told Coach Hall first, then Coach (Brent) Venables and then we told Coach Swinney. They were all really excited.”

What allowed Clemson to stand out?

The weekend has been a boon for the Clemson coaches, who picked up commitments from Denhoff and elite playmakers Beaux Collins and Jake Briningstool.

What are the Tigers getting with Denhoff?

“The biggest thing they are getting is a high motor,” he said. “I am going to give 110 percent on every play. They are going to see me flying to the ball every chance I get.”

For his junior season, he had 92 tackles, 11 sacks, four pass breakups, and three forced fumbles. Over the last three seasons, he has 24.5 sacks and 231 stops.