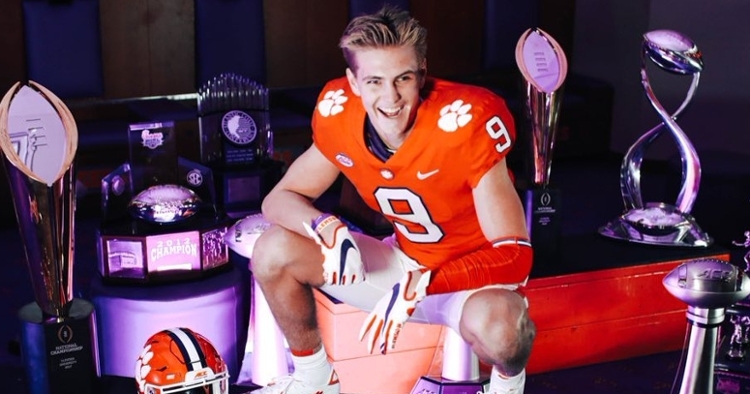 Briningstool poses with some of Clemson's hardware

After multiple visits to Clemson and contemplating a decision, Jake Briningstool decided to make it official and go All In with Dabo Swinney and the Tigers. With a commitment out of the way, Briningstool has gone back to work to prepare for a dominant senior season of high school football.

TigerNet caught up with Briningstool to discuss his recruitment and what made Clemson the perfect place for the talented tight end.

Briningstool committed to Clemson after Elite Junior Day in January. The 6-5, 215-pound athlete from Ravenwood HS (Brentwood) TN made multiple visits to Clemson during his recruitment, and seeing Clemson in preparation for a big game was the tipping point in knowing where he wanted to play college football.

“I visited four times,” Briningstool told TigerNet. “It was the summer camp, the Texas A&M game, bowl practice (2019 Fiesta Bowl), and Elite Junior Day. After the season, when my dad and I came down for bowl practice, was pretty much when my mind was made up that I wanted to go to school there.”

After seeing Clemson in person, Briningstool took notice of the way the program has been built. More than just on-field success, Clemson stood out to Briningstool in multiple ways.

“The culture,” he said. “It’s a family culture and it’s a winning culture. Coach Swinney built something special and I’m happy to be a part of it. I really like the fact that Coach Swinney incorporates God into the program and the whole staff is dedicated to helping you leave a better man than when you came in, regardless of football.”

Briningstool brings a ton of versatility to the tight end position, opening lanes in the running game and creating mismatches in the passing game due to his size and speed. Another big factor in his recruitment was how he fit in an offense, and a former Tiger was used as an example of ways Briningstool would be utilized in the high powered Clemson offense.

“The style of offense they ran was a big factor in my decision,” Briningstool said. “My family and I paid close attention to the tight ends on TV as well as on the field when we visited. I didn’t want to go somewhere and be a tight end who just puts his hand in the dirt and isn’t really involved in the passing game. Clemson said they would use me the same way they used Jordan Leggett back in 2015. They said I would be versatile and line up out wide as well as being attached. My final 3 were Alabama, Ohio State, and Clemson. All three of those schools sat down with me and watched film of how I’d fit into their scheme.”

After talking to his family at Elite Junior Day, Briningstool decided to let the Clemson staff know that he was ready to commit before leaving town.

“My family and I went back to the hotel and we just talked and prayed and I told them I wanted to go here,” he said. “The next morning, me and my mom, dad, my brother and my sister all went over to Coach Swinney’s house with Coach (Danny) Pearman, Coach (Lemanski) Hall and Coach (Jordan) Sorrels. I told them I wanted to be a part of the Clemson family and turned in my All In poker chip they gave me when they offered me in the summer. Everybody started cheering and hugging me and my parents. It was a really good time. I can’t wait to compete and start the next chapter of my life, and I’m excited to build relationships that’ll last forever.”

What are the areas of Briningstool’s game that he considers his strengths? And what is he looking to improve on?

“I’m working on getting bigger and my releases,” he said. “I’ve been lifting in our basement and eating pretty much everything I see while still staying in shape. I want to be around 225. I would say some of my strengths would be my route running, my length, and being versatile to be able to block and line up out wide.”

“Me and Coach Pearman talk almost every day,” he said. “Sometimes he’s giving me advice, sometimes he’s sending me something motivational, but mostly we just talk in general. And I think this class will be special and we’ll have the best class in 2021. I’m working on Will Shipley and Troy Stellato.”

Currently rated as a 4-star by 247 Sports, Briningstool comes in as the No. 1 tight end in the nation and No. 1 player in Tennessee. Briningstool has great hands to go along with his long body, constantly catching the ball away from his body on film. Briningstool also shows great athleticism and body control, looking fluid coming in and out of his breaks in his routes.