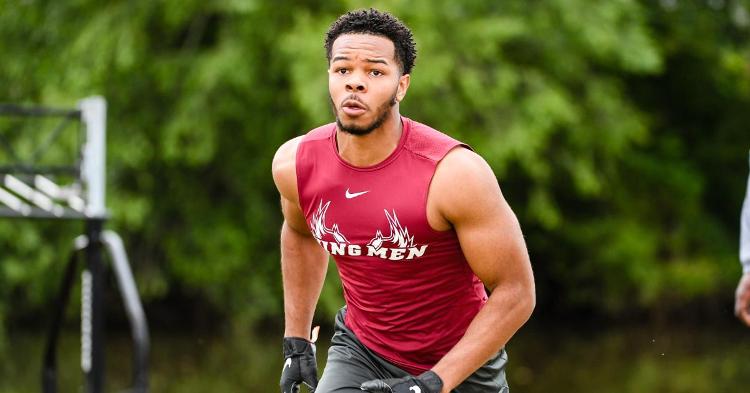 Trotter is eager to get started on his Clemson career.

Jeremiah Trotter Jr. is coming to Clemson with an NFL bloodline and eagerness to play in Brent Venables’ defense.

Clemson’s 2021 recruiting class includes multiple players ranked at the top of their position group. That group includes the nation’s No. 1 inside linebacker, who is signed and set to early enroll with the Tigers. Trotter Jr., the son of former All-Pro NFL linebacker Jeremiah Trotter, is listed as a 4-star, ranked by 247Sports as the No. 1 inside linebacker and the No. 30 player overall in the country. The 6-0, 210-pound linebacker from Philadelphia (PA) St. Joseph’s has been a long time Clemson commit, and now he’s set to join the Tigers on January 3rd.

Trotter is one of two high-profiled linebackers in the ’21 class, along with 5-star Barrett Carter. Trotter will have Brent Venables as his position coach and defensive coordinator, and he’s ready to learn the schematics of Venables’ defense.

“I’m really looking forward to his defensive schemes. Just from watching games, it resembles the defense that I played in high school, with the positions and alignments,” Trotter told TigerNet. “He’s just a great defensive play caller, and the Clemson defense is hard to stop with him leading it. I’m really looking forward to playing in that defense and seeing how he’s going to use me in the defense.”

Trotter has been a Clemson commit since September 2019, becoming one of the first members of the ’21 recruiting class.

“It felt great, just for it to be officially happening and know that I’m locked in and ready to go for January,” Trotter said of signing his letter of intent. “I’m really excited and I can’t wait to get out there and show what I can do. I’ve really been focused in on my classes so I could finish up and graduate, and just making sure I got done what I needed to do. I’ve been working out and getting ready, and it’s all went really well. I’m ready to get to Clemson.”

Clemson is well-known for their game day environment and stadium atmosphere, and Trotter is excited to witness that firsthand.

“I would say that feeling that being on campus brings,” he said of what he’s looking forward to. “Just that family feeling from teammates and other students. All the fans are always showing love to the players, and I can’t wait to see that with my own eyes and see what that feels like.”

Trotter and the ’21 class are ready to leave their mark on the Clemson program, and Trotter wants to be remembered for being more than just a football player.

“My goals going in right now is just making sure I do what I need to do. Just going in and working hard, and everything else will work itself out in the future,” he said. “I just want to leave my mark and make sure everyone remembers me. Not just as an athlete, but as a student-athlete and a great all-around person.”

Trotter was able to play a shortened high school season this season, securing a state championship for St. Joseph’s. Trotter was selected as a member of the 2021 All-American Bowl and also named a MaxPreps 2020 Preseason All-American.