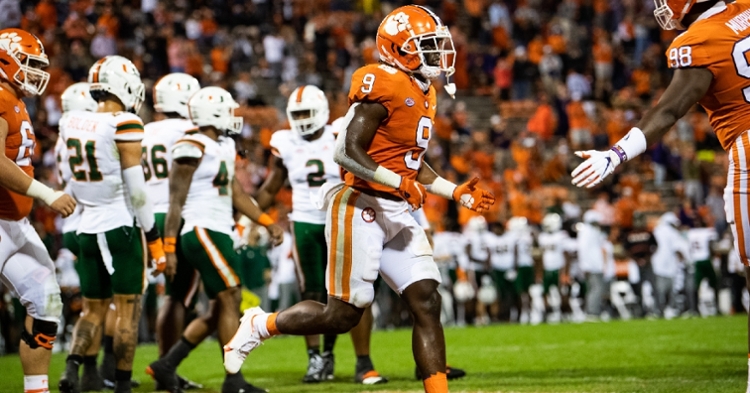 CLEMSON – Trevor Lawrence, knocked out for one play earlier in the drive, had just scored on a short third-quarter touchdown run and turned around and spiked the football at the feet of a Miami defender and drew an immediate flag. The flag didn’t matter, Lawrence made his statement. As did the rest of his teammates.

No. 1 Clemson fought through myriad mistakes but still throttled No. 7 Miami in gritty fashion, blowing out the Hurricanes 42-17 Saturday night in Death Valley, a statement to the rest of the ACC that the title hunt still goes through TigerTown.

Clemson improves to 4-0 overall and 3-0 in the ACC. Miami falls to 3-1 overall and 2-1 in league play. Clemson travels to Atlanta to take on Georgia Tech at noon next Saturday, while Miami hosts Pitt.

"I thought we controlled the game from the opening kick," head caoch Dabo Swinney said. "Just a fun, fun game all the way through. We made lot of mistakes, but they didn't flinch. That's the making of a good team. I think we are 10-1 in rain games since 2009. I love that stat. It epitomizes the mindset you have to have."

Swinney said he was pleased with the defense.

"Defensively, I was worried about this quarterback coming in," he said. "We kind of tweaked our scheme to account for him. We were mostly a three-man front all game and had an extra defensive back, Jalyn Phillips, in the game all night. We thought our best chance to contain D'Eriq King was to contain him with our speed at linebacker because he man those big guys up front miss."

He was also proud of the way the offense handled the Miami defense.

Miami won the toss and deferred and the Tigers marched methodically down the field. Facing a 4th-and-4 at the Miami 38, the Tigers went for it and the ball appeared to be intercepted. However, the Canes were ruled offsides for a Tiger first down. Two plays later Lawrence rolled right and with the Miami defense following, threw back across the field to tight end Braden Galloway, who rumbled 25 yards for the score and a 7-0 Clemson lead.

Ironically, Clemson ran the same play on the opening drive at Miami in 2015, a throwback to Leggett for a score. That play from Deshaun Watson to Leggett covered 34 yards.

Miami was forced to punt after Cane quarterback D’Eriq King was sacked near midfield, and Clemson took over at its own 11 with just over seven minutes remaining in the quarter. The rest of the quarter was all Tigers as they put together a 17-play drive that covered all 89 yards.

A 22-yard screen pass to Etienne set the ball at the Miami two on the last play of the quarter, and the first play of the second quarter saw Etienne run into the middle of the defense and get stopped, reverse course and bounce it outside for the touchdown and a 14-0 lead. Clemson ran 25 plays to Miami’s six in the opening stanza.

The Tigers missed out on the next drive when Frank Ladson dropped a sure touchdown, and the ensuing possession ended on a blocked field goal and the Tigers still led 14-0 as the second quarter wound down. King finally got loose on a 56-yard run, and that set up a 42-yard field goal from Jose Borregales and Clemson led 14-3 late in the second quarter.

The Tigers put together a nice six-play, 70-yard answering drive that ended with an 11-yard pass from Lawrence to Galloway and a 21-3 lead. Miami tried to push the ball down the field but was forced to punt with just under a minute left in the half.

The Tigers pushed the ball past midfield and with just four seconds left on the clock, head coach Dabo Swinney sent Potter out to attempt a 61-yard field goal. The attempt was blocked and picked up by DJ Ivey, who returned it 48 yards for the touchdown. The extra point was good and Clemson led 21-10 at intermission.

Miami punted on the first drive of the second half, but Lawrence fumbled the ball away on a third down scramble and the Canes took over at the Tiger 39. Miami picked up a first down on a King third-down scramble, but Sheridan Jones intercepted King in the end zone on the next play to give the ball back to the Tigers.

Clemson added another big play later in the quarter. Following the sixth Miami punt of the night, the Tigers took over at their own 27. The first play was a counter play to Etienne, who broke off the left side and outran everybody to the endzone for a 73-yard touchdown run.

Miami’s third-down pass on the next drive was a half-yard short of the 30 and the Canes decided to go for it deep in their own end. The run to Cam’Ron Harris was stoned well short of the line to gain and Clemson took over deep in Miami territory. However, Potter once again had a field goal blocked and the score remained 28-10 with 5:20 to play in third quarter.

The Clemson defense once again bailed out the offense when Derion Kendrick intercepted King on the second play of the ensuing drive, giving the Tigers the ball at their own 40. Lawrence put the nail in the coffin with his three-yard scoring run, putting the Tigers ahead 35-10 with 2:31 to play in the third quarter.

The Canes added a scoring run by King midway through the fourth quarter, but Clemson didn't waste any time in marching 65 yards for the score. Lawrence hit Davis Allen over the middle from 22 yards out to make it 42-17 with 4:32 remaining.