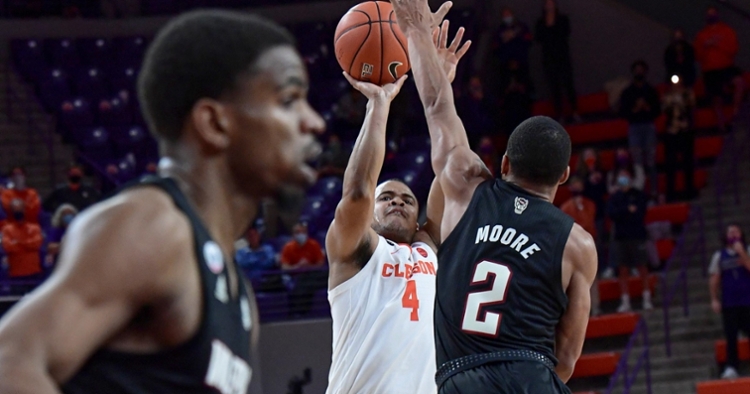 Clemson overcame a halftime deficit for the third game in a row and Nick Honor scored 21 points as No. 19 Clemson defeated NC State 74-70 in overtime at Littlejohn Coliseum Tuesday night.

The Tigers overcame halftime deficits against both Florida State and Miami in recent victories. Honor was superlative from the floor, hitting 8-of-11 from the field, but more importantly, 5-of-6 from beyond the arc. Clyde Trapp scored 11 as the only other Tiger in double figures.

Devon Daniels of NC State hit two free throws to make it 72-70 Clemson with just 41 seconds to play in overtime, and the Tigers used a lot of the shot clock on the ensuing possession. PJ Hall posted up and backed into the lane, eventually putting up a jump hook that bounced off of the back iron and fell in to make it 74-70 with just 10 seconds left. The Pack failed to hit a shot on the other end and the Tigers were able to walk away with another ACC win.

Clemson improves to 9-1 overall and 3-1 in the ACC, while NC State falls to 6-2 overall and 2-1 in the league. Clemson has now won four in a row over NC State at Littlejohn Coliseum.

"This was a hellacious win. There's no other way to put it," head coach Brad Brownell said. "NC State was more aggressive in the first half, but our guys rallied. In the second half, we did what we were planning to do coming into the game. Our defense in the second half was terrific. Nick [Honor] made shots and gave us a huge jolt of confidence. Aamir [Simms] played great down the stretch. I'm proud of P.J. [Hall] and Alex [Hemenway], who both hit big shots for us."

Brownell said his team finally was able to execute.

"The longer the game went on, the better we executed," he said. "We've really executed down the stretch well recently. I'm super proud of our guys for handling their business against a team that's really aggressive."

The teams traded the lead and buckets for much of the first half and were tied at 20-20 with 8:50 remaining in the half when the Pack began to pull away. Back-to-back 3-pointers pushed the lead to 26-20, but Honor hit a trey of his own to make it 26-23.

Clyde Trapp hit a layup at the 2:42 mark of the first half that made it 34-32 Pack, but NC State scored the final five points of the half and led 39-32 at intermission.

Both teams were cold to start the second half, but NC State broke the spell at the 17:52 mark on a short jumper by Manny Bates that pushed the lead to the largest of the night at 41-32. Honor went to work at that point, however, and hit a layup and a 3-pointer that trimmed the Pack lead to just three at 42-39.

The Tigers continued to battle, and when Honor fed PJ Hall in the lane for a bucket Clemson trailed by just one at 47-46. NC State eventually pushed the lead back to five at 51-46, but Aamir Simms scored his first field goal of the night to make it 51-48, and Olivier-Maxence Prosper hit a layup that again made it a one-point game at 51-50 with just under nine minutes left to play.

The Pack again made another run and led 57-50 after a free throw by DJ Funderburk. However, Hemenway ran a scissor cut, moved to the top of the key, and after taking a pass from Jonathan Baehre made a 3-pointer that made it 57-53. Funderburk hit two more free throws to extend the lead to 59-53, but Baehre’s dunk made it 59-55 with four minutes left on the game clock.

The Pack’s Cam Hayes hit a free throw that pushed the lead back to five at 60-55, but Honor found Alex Hemenway under the basket for a layup that made it 60-57. The Tigers got the ball back with a chance to tie, but Simms’ 3-pointer rimmed out, but the Pack missed a layup on the other end to keep the score at 60-57.

Simms was fouled on the ensuing possession and hit two free throws that made it 60-59, but Funderburk answered with two more free throws and the lead was 62-59 with 1:41 to play. The Tigers then wasted a possession, hurrying a shot as the shot clock expired, but the defense clamped down on the Pack and Simms grabbed Funderburk’s missed jumper and raced up the court. Simms found Honor on the right wing and Honor calmly drained the tying 3-pointer with just 38 seconds remaining.

After NC State brought the ball up the court, Simms stepped in front of a pass intended for Funderburk and the Tigers called timeout with just 12 seconds to play. The Tigers set up a play for Honor, but his shot off the right key was blocked by Shakeel Moore and the teams went to overtime.

Funderburk hit the first big shot of overtime when he nailed a 3-pointer that gave the Pack a 67-66 lead at the 3:14 mark of overtime, but Simms hit two free throws and left-handed runner in the lane that put the Tigers back on top 70-67 with just 1:35 to go. Moore hit a free that made it 70-68, but Honor also hit a left-handed runner in the paint to put Clemson up 72-68 at the 50 second mark.

Clemson returns to action Saturday, traveling to Chapel Hill to take on North Carolina. Tipoff is scheduled for 7 pm and will be broadcast on ESPN.

Clemson vs NC State Box Score
Comment on this story