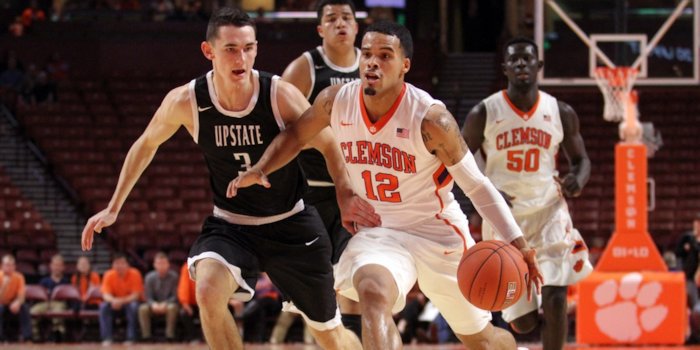 GREENVILLE – Avry Holmes scored a Clemson career-high 20 points and the Tigers hit eight 3-pointers in a 39-point first half, cruising to a 76-56 victory over USC Upstate at the Bon Secours Wellness Center Wednesday night.

The Tigers, playing just two days after a late loss at Minnesota on Monday, improved to 5-2 on the season while Upstate fell to 1-8.

"We had an incredible, short turnaround with the 5AM arrival yesterday morning and really no practice yesterday, just kind of a one day prep," Clemson head coach Brad Brownell said. "I thought our guys showed great focus and energy. I thought Avry Holmes was outstanding."

"It's just confidence," Holmes said. "I feel like it is the pace of the game. I think a lot of the guys play better with a faster pace, getting closeouts and getting wide open rhythm three's. Guys feel confident."

The teams were scoreless through the game’s first two-and-half minutes, but a Blossomgame layup broke the ice, and the Tigers went on a roll. Clemson jumped out to an 8-3 lead after a dunk by Blossomgame a few minutes later.

Clemson eventually led 39-22 at intermission after hitting 8-of-17 from beyond the arc. Hudson and Roper led the Tigers with nine points apiece.

The Tigers went on an 8-4 run in the first five minutes of the second half, with a layup by Holmes and back-to-back 3-pointers from Blossomgame and Grantham that made it 47-28 with 14:53 to play.

The Tigers kept a working margin of about 20 points, but a turnaround jumper by Josh Smith, a 3-pointer by DeVoe and a 3-pointer by Smith made it 66-42 with 7:36 to play. It was at that point that big man Legend Robertin – who was cleared by the NCAA earlier in the day – made his second appearance.

Robertin quickly grabbed a rebound – after getting a steal earlier – and hit two quick baskets to the delight of the crowd, the second a dunk that gave Clemson a 70-46 lead with just under six minutes to play. Robertin had to leave the game just a few minutes later after he came down awkwardly on his leg.

The Tigers substituted liberally from that point on. Clemson returns to The Well Sunday, hosting Wofford in a 2 p.m. tipoff. The Tigers will then have a week off before hosting Alabama on Dec. 13th at 6 p.m.

Clemson vs USC Upstate Boxscore
Comment on this story