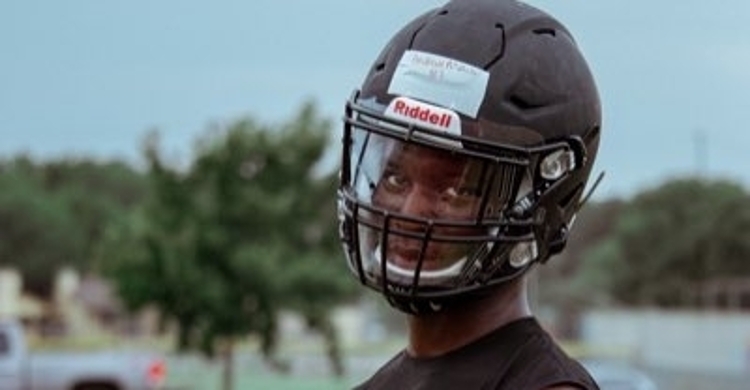 Mukuba is set to make his decision Thursday.

One of the top remaining prospects in the country for the 2021 class is getting set to announce his college decision on Thursday. With no players currently committed to Clemson in the secondary, the Tigers are hoping to gain a key commitment from a priority target.

Andrew Mukuba announced a top-3 on Wednesday and will reveal his final school on Thursday at 7 CT (8 ET), with Clemson in a lead group consisting of LSU and Texas. Mukuba is a 4-star safety from Austin (TX) LBJ, currently ranked as the No. 14 safety in the nation and No. 212 player overall according to 247Sports.

The 6-0, 185-pound prospect holds over 30 offers and reported a Clemson offer in March, with safeties coach Mickey Conn and defensive coordinator Brent Venables heading up his recruitment.

Mukuba had hoped to visit multiple schools during his recruitment, but on-campus recruiting was shut down before Mukuba was able to take any trips. As phone calls and Zoom meetings took over the recruiting world, Mukuba felt the need to trim his list and focus on the major contenders.

“The only thing that was kind of different was the amount of phone calls I was getting at one point in time. That made we want to cut down my list just a little bit because I had other things I needed to focus on, like my school stuff,” Mukuba told TigerNet. “That made me want to cut down my list, just to limit the phone calls. It wasn’t as hard as I thought it would be, but it was difficult because it’s something no one has ever experienced.”

Mukuba had the chance to take a virtual tour with Conn, and Mukuba came away impressed with the size of the Clemson facilities. Mukuba also spent time getting to know Venables, and Mukuba had high praises for the Tigers defensive coordinator and the program.

“I liked the Clemson facilities. All the schools had one thing about their facilities that was eye-popping,” Mukuba said. “I liked that at Clemson, everything was big. The weight room had a lot of space. The tour was really good, I got to talk to the academic advisor. And I’ve had great conversation with coach Venables. And just talking to coach Venables and knowing his resume and what he’s done and what he’s going to do, to me he’s one of the best defensive coordinators in football right now. What made me like Clemson was that they turned down a couple of commits from other big time recruits just to focus on me, and that really opened my eyes. It showed me that Clemson doesn’t just want me but they need me.”

Mukuba’s hometown Longhorns have also made a strong impression, with Texas being the only school of his contenders who were able to get Mukuba on campus before recruiting was shut down.

“That’s my hometown, I stay 15 minutes from campus,” Mukuba said of Texas. “My family could come watch me play and I’d be really close to my family. I’m a big family person, so that’s important to me. And just the change coach (Tom) Herman is about to make at Texas is going to be crazy. And the relationships I’ve built with coach (Chris) Ash and coach Herman and all those guys has been amazing.”

Mukuba’s relationship with head coach Ed Orgeron has put LSU in a good position going in to his decision.

“I’ve got a really good relationship with Coach O. With him it’s different from the relationship with other head coaches,” Mukuba said. “I feel like I can call him at any time and talk about anything, and not just football. Just the conversations I’ve had with him has put them high on my list. And the relationship I’ve built with the safeties coach, coach (Bill) Busch. He’s told me some really great things I can do at LSU.”

Leading up to his decision, Mukuba has focused in on a few key factors when deciding where he will continue his education and play football.

“Just a chance to come in and compete for a starting job early,” he said. “I feel like I’m a guy that can come in and make a big impact as a true freshman. Whatever I got to do to get on the field early at whatever school I pick, I’ll play whatever position I got to play to get out there and ball out. I’m looking for a school that is consistent with their coaching staff. You don’t want to get recruited by one staff and then get there and it’s a whole different coaching staff. I’m really high on the consistency of the coaching staff and how long they are going to be there.”

In 2019, Mukuba was named the District 12-5A-I Offensive Newcomer of the Year and unanimous first-team All-District. Mukuba totaled 50 tackles and 3 interceptions on defense, while adding in 1,200 yards receiving to go along with 15 total touchdowns.