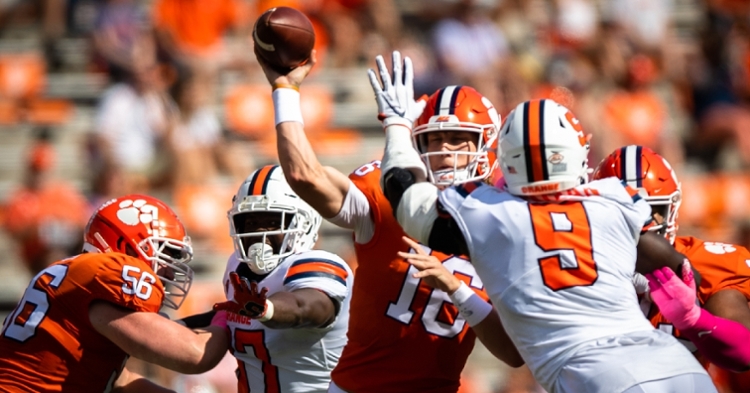 CLEMSON – Three things seem to be consistent in life – death, taxes, and Clemson not playing up to its standard against an outmanned Syracuse team.

The top-ranked Tigers suffered a pick-six, a missed field goal, a blocked punt, a blown coverage, and myriad mistakes against Syracuse but still came away with a 47-21 victory on a hot day in Death Valley.

Trevor Lawrence was 27-of-43 for 289 yards, two touchdowns and one interception. Travis Etienne carried the ball 16 times for 86 yards and three scores, while Amari Rodgers caught eight passes for 91 yards.

Clemson won a 26th consecutive home game to extend its school record for the longest home winning streak in school history. Of the 119 players on Clemson's 2020 roster, 110 have never experienced a home loss in their Clemson careers. Nine fifth-year seniors on Clemson's 2020 roster were on the 2016 team that recovered from a home loss to Pitt by winning the national championship that season.

Clemson also won a 27th consecutive game against an ACC opponent, including postseason play. A 27-game winning streak against conference opponents puts Clemson within one game of the 2012-15 Florida State Seminoles (28) for the second-longest streak in ACC history.

Clemson won a 38th consecutive non-bowl game, which passes the 1992-96 Nebraska Cornhuskers for sole possession of the third-longest streak in the AP Poll era.

“Proud of our team. A tough game, but sloppy in a lot of areas. We really came out of the gates pretty good and got up 17-0, and then just a lot of miscues,” head coach Dabo Swinney said. “Some things that really we have got to clean up. We always talk about let's take care of Clemson, let's don't lose to Clemson, and let's control the things we can control. It's hard enough to win, you don't have to make it any tougher. We just did some dumb things. We had some dropped balls, some missed throws, a couple of penalties in the red zone, the blocked punt. That is about as simple as it gets. Just some miscues but really proud of our team and how they responded.”

He then said the team put itself in harm’s way with the mistakes.

“A lot of teams, this is a game they would lose, for sure. There were a lot of things that happened in the game that can cost you games,” Swinney said. “We did some bad stuff on both sides, but both sides responded. When we had to have drives we put drives together. I was really proud of the drive right before the half there. A lot of good things that will be teachable things, and then some bad things. We had a snap over the quarterback's head after we had a nice drive going. We had way too many negative yards. We put ourselves in harm's way with some things we haven't done.

“But at the end of the day, if you can be a little sloppy and still win a game by 26 points against a team that is fighting with everything they've got, that really says a lot about the character of your team. We will get better and learn from it and go back to work. We are 6-0 and that is where we wanted to be at this point. We are looking forward to getting back in on Monday and preparing for another tough challenge in BC.”

The Tigers took the opening kickoff for an early score. Lyn-J Dixon returned the kickoff 49 yards to the Syracuse 47-yard line. Five plays later, Lawrence hit Cornell Powell on a 25-yard throw and Clemson had the early 7-0 lead barely 90 seconds into the game.

Two drives later, Nolan Turner intercepted his second pass in as many weeks and returned it 21 yards to the Syracuse 13, but the Tigers had to settle for a BT Potter field goal and a 10-0 lead.

Syracuse went for it on 4th-and-1 at their own 45, but the ball carrier was dropped for a two-yard loss and a turnover on downs. Etienne punctuated the next drive with a 25-yard scoring run and it looked like the rout was on with a 17-0 lead with four minutes remaining in the first quarter.

The next several minutes were ugly.

Punter Will Spiers had his next punt blocked and Syracuse recovered at the Tigers’ 20-yard line. Sean Tucker turned that into an eight-yard touchdown run and the lead was just 17-7.

Clemson put together a 12-play drive on the ensuing possession, but Potter’s 37-yard field goal attempt went wide right. The Tigers answered with another 12-play drive, this one covering 87 yards, and Lawrence hit a wide-open Davis Allen for a 17-yard scoring toss. With 2:54 to play in the half Clemson led 24-7.

Syracuse ran six plays and 90 seconds off the clock but was forced to punt and Clemson took over at its own 12 with just over a minute to play. Lawrence tried to hit Rodgers in the seam but the ball bounced off Rodgers’ hands and was intercepted by Garrett Williams, who returned it 39 yards for the score and Clemson’s lead was just 24-14.

Clemson moved the ball 56 yards on 11 plays and Potter hit a 36-yard field goal as time expired and the Tigers led 27-14 at the break.

The Tigers came out in a funk to start the second half, punting after just one first down, and the Orange got right back in the game with a big play. Quarterback Rex Culpepper found Nykeim Johnson over the top for an 83-yard score. Johnson blew past safety Joseph Charleston – covering Johnson in the slot – and easily outran the defense to the end zone and it was 27-21.

The Clemson offense continued to sputter, punting on each of the next two drives, so the defense decided to score. Culpepper dropped back to pass and was swarmed by Bryan Bresee and Mike Jones. Culpepper dropped the ball and Andrew Booth scooped it up for a 21-yard touchdown return. With 1:26 left in the third quarter Clemson led 34-21.

The defense forced another Syracuse punt and the Tigers took over at their own 33. A 23-yard pass to Rodgers on the first play saw the Tigers move into Orange territory, and a 15-yard facemask penalty after an eight-yard pass to Rodgers put the ball at the 21. Two plays later Etienne rumbled in from nine yards out for the score. Clemson attempted to go for two, but Lawrence’s pass sailed over the head of Braden Galloway. With 13:38 to play. Clemson led 40-21.

Mike Jones helped the Tigers put the game out of reach, stepping in front of a Culpepper pass and returning it 40 yards to the Syracuse 3-yard line. Three plays later Etienne burst over the left side for his 64th career touchdown and a 47-21 Clemson lead with 10:45 to play.

The Tigers host Boston College next week at noon (ABC).