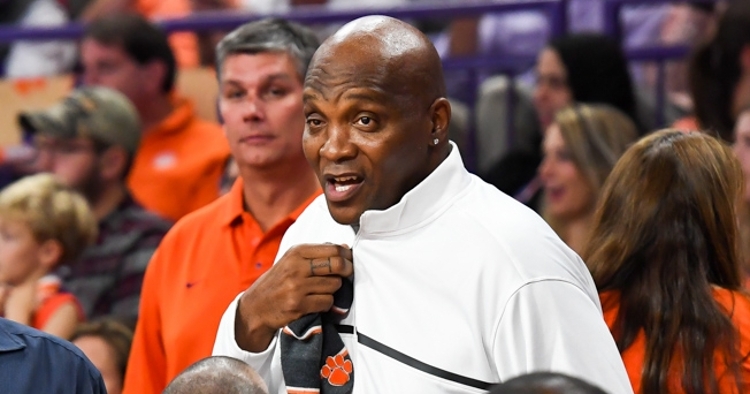 One of my favorite athletes in my 40 years as Clemson sports information director is Sharone Wright. He came to us as a 6-10 freshman with a big personality, a big game, and a big heart.

During an All-ACC and honorable mention All-American career at Clemson, he led the ACC in rebounding and blocks, then was the number-six selection of the 1994 NBA Draft, still the highest selection in Clemson history.

His first year in the NBA, he made the All-Rookie team and had two more years of double-digit scoring after that. Then, in July of 1997, while en route to speak at a basketball camp for the Boys and Girls Club of Macon, Georgia, his hometown, his car skidded off the road on a rain-drenched morning and he suffered multiple broken bones.

The recovery period was long and he played only seven more games in the NBA. He went on to play professionally in Europe for almost a decade, but it was not the NBA.

After his playing career concluded he went into coaching at different levels. Five years ago, while living in Florence, SC, he faced a bout with cancer, a fight that nearly took his life. Few knew the serious nature of his battle.

But, he won that fight and continued to pursue his coaching career at a prep school in Arizona. Over the last year, he contracted a staph infection in his left leg that got worse and worse.

Less than a month ago, Wright had his left leg amputated.

There are many former Clemson athletes who have faced physical challenges, especially in recent years. Brian Mance and Dwight Clark come to mind immediately. But, I can’t remember one who has had three such major challenging events as Wright has had since he left Clemson.

“It is a long road back, but I am going to be OK,” Wright told me. “My plan is to get a prosthesis in a couple of months so that I can get around and get back to coaching. I appreciate all the good wishes from my former teammates and all the people at Clemson.”

As a result, Wright will have some financial challenges ahead. His out of pocket expenses from the cancer treatments and from the impending expenses for a prosthesis and corresponding rehab are considerable.

So, friends of Sharone Wright are setting up a Gofundme page to help him with these expenses (see below).

Last year Clemson nation made a significant contribution to help all-time leading tackler Bubba Brown with his health expenses and we hope you will respond the same way to help another all-time Clemson great. Any amount is appreciated.

*David Hood note: I spoke with Sharone Tuesday afternoon and he told me that he is still in the hospital (for three weeks this time) but is hopeful they can get an infection under control and he can go home next week. He needs a wheelchair and medications and once he is healed he will be in line for a prosthesis so he can walk again. He is obviously facing a mountain of expenses and they are beginning to pile up. I told him we would do everything in our power to help. Former Clemson football player JK Jay has set up the GoFundMe to help. Any amount will help.

Sharone also holds a special place in my career: when I first started at The Greenville News/Greenville Piedmont, I covered a Clemson at South Carolina basketball game in Columbia, and he was my first real basketball interview. I told him on the phone earlier today that his kindness to me meant more than he will ever know.