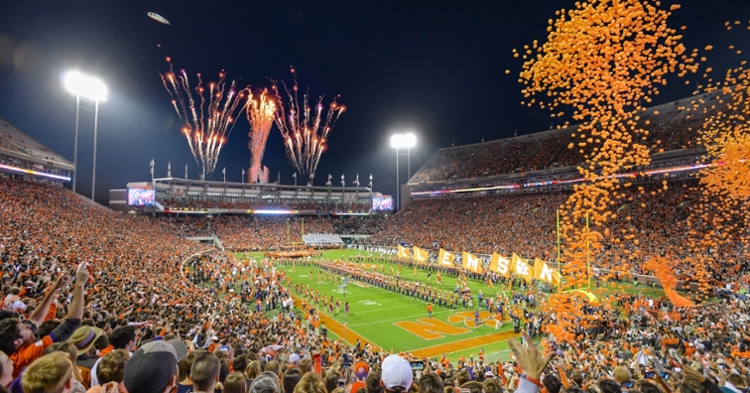 Death Valley stadium renovations are on hold - for now.

Football season is over, and basketball is in full swing, but what comes next? I am glad you asked.

Clemson football will start spring practice at some point in the next six or seven weeks and spring sports are on the horizon. That includes fan favorites baseball and softball, and we’ve had several questions about tickets and attendance for those sports and other general questions about the program as we head into a busy time of year, and I reached out to Jeff Kallin, Clemson Associate AD of Communications and Strategic Initiatives, for answers to those questions.

In regards to attendance at baseball and softball, Kallin said the athletic department is working through exact numbers of fans allowed but he already has a general idea.

“In baseball, we are still working through what the exact number will be, but it's probably going to be in the 1100 total fans allowed at baseball and between 300 or 350 fans allowed at softball,” Kallin said. “What we are working through is the size of the guest lists are going to be for those rosters, the number of visiting tickets that we are required to give to the opponent, and then how many we are going to be able to give to the general public.

“It's most likely that we won't do season tickets, just like we've done throughout the year for our other sports. Like in basketball, we allowed our season ticket holders to sign up for a ticket, but we didn't sell season tickets. We just asked people the games that people wanted to come to, and we decided to sell them as one-offs for the games they said they weren't going to use. So we are going on a game-by-game basis.”

In late 2019, the Clemson Board of Trustees approved the athletic department’s proposal of roughly $70 million dollars worth of renovations to be done in Death Valley. Phase one would cost around $1,040,000, and the total cost of all renovations is an estimated $68,400,000. Phase one was slated to begin construction in December 2020 with a completion date in August of 2021.

The addressed changes included adding premium seating and club spaces, better ADA accessibility, “fan experience upgrades,” parking lot enhancements, and modifications to the locker rooms. The fan experience upgrades included a bigger video board over the hill, new sound system, and LED lights. I would imagine the LED light system would look like what has been done at Alabama, Nebraska, and Georgia.

However, those changes are on hold.

"We are just not there," Kallin said. "Obviously, it didn't start after the Pitt game this year. It didn't start then and we just aren't there yet in re-engaging that process as of January 11th. However, I could see that discussion picking up again at some point here soon."

Twenty-nine of the most highly compensated employees in our self-sustaining Athletics department, which has been hit particularly hard by the pandemic, will continue their voluntary pay reductions through the end of the fiscal year as originally planned,” Clements wrote. “These efforts, along with other steps such as a sharp curtailment in hiring, freezing salaries, the elimination of most non-essential travel and the decision to operate at fiscal year 2020 budget levels well into the current fiscal year, helped make it possible for us to freeze undergraduate tuition for the current year despite incurring significant costs related to the pandemic.

“We will continue to operate in a way that prioritizes efficiency while not sacrificing academic quality or our student experience.”

The scheduled COVID-19 testing for student-athletes will continue as mandated by the ACC. As for football, which is no longer in season, those student-athletes will now have their number of weekly tests drop from three to one, the same as the rest of the student population (and university employees).

Baseball and softball are considered to be low-contact sports and those student-athletes will be tested twice a week.

Kallin also wanted to say that the university can't do enough or express enough appreciation to the fans for how they have handled everything through the pandemic. That appreciation was expressed by Athletic Director Dan Radakovich a week ago:

It is with deep appreciation that despite the limited 23% capacity in the stands and no tailgating, IPTAY donors generously stepped up and gave us 89% of annual philanthropic dollars this year. From conversations that I have had with my peers, this is among the highest rates of giving anywhere in the nation. IPTAY funds nearly $13 million in annual scholarships, as well as all of our student-athlete support programming. Without this support, we simply would not be able to offer the experience we do to our nearly 500 student-athletes.

Despite the incredible generosity of our donors, the financial impacts of the pandemic continue to be felt and we have had to make some difficult decisions. University-wide pay cuts and implementing furloughs and other cost-cutting measures will still leave us with an anticipated resource shortfall of $25 million in this fiscal year. We must continue to evaluate how to best use our resources going forward.