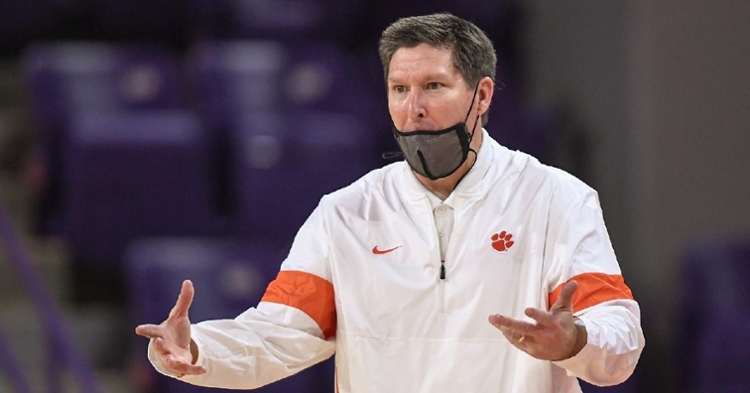 Brownell says he's mad at himself for helping his team better. (ACC photo)

Brad Brownell feared that the unscheduled break over the last week would show on the court Saturday, but he certainly didn't blame it for just how lopsided things became in the 85-50 loss to No. 18 Virginia Saturday night.

Clemson, which rose to a position solely atop the ACC in the AP Poll earlier this week at No. 12, had a 5-day layoff due to COVID-19 protocol and the Tigers' return to practice on Wednesday gave Brownell an unwelcome glimpse of what was ahead.

"We weren't good. We looked slow. We looked tired. We threw the ball all over the gym. It was bad," Brownell told media Saturday night of the midweek practice he had to observe over a video call. "This break wasn't good for us. This break was bad, but it shouldn't have been like this.

"That's not an excuse. Our team needed to play better. We needed to coach better."

The Tigers, which came in rated No. 1 by KenPom in defensive efficiency, saw Virginia shoot 61 percent from the field -- and higher than that at points while building a big lead -- with 15 made 3-pointers. The loss was the worst in the Brownell era since a 109-61 defeat at Florida State in 2017 and the worst home loss for the Tigers under Brownell.

What brought Clemson to the lofty AP ranking was how well the team was playing and not overwhelming talent, however, Brownell noted.

"You just lose a little bit of your competitive spirit and your fight," Brownell said of the break, "and to be honest with you -- and it shows in this game, we're not the most talented in the league. We're not one of the most talented teams. We can't just show up and play. We don't have a guy we can just throw the ball to and he's going to go make a bunch of plays. We have to really work at it and we have to work together. We have to be connected and we really have to work and play well together. Tonight we just couldn't do that.

"You saw a team that did that and they were clearly way too good for us to handle tonight."

The loss marked an 11th-straight defeat in the series for Clemson and Brownell placed a heavy share of the blame on himself for how things got out of control.

"I didn't think our defense was very good at all. Again, credit to those guys," said Brownell. "They made a couple guarded shots, but we had some terrible breakdowns where -- I thought we panicked in the game. We started the game and got some really good shots -- wide-open threes -- and we missed them all and we're down 10-2. And when you get behind against Virginia, that's not good because they don't help you.

"They don't take bad shots. They don't turn the ball over. They don't make very many defensive mistakes and can't get out in transition. Then you've got to be unbelievably efficient and we panicked and didn't do some of the things we really wanted to do, and again, a lot of the credit goes to Virginia. They just smashed us today.

"We weren't ready. I love my team. Proud of my guys. This is the first game all year where we weren't able to bounce back with some adversity. That's something that I've got to do a better job of helping them. I couldn't find a way to help them today. I'm mad at myself for not figuring a way to help my team better."

Brownell says the Tigers have to quickly put the performance behind them ahead of going on the road to Georgia Tech on Wednesday (7 p.m./RSN).

"I have a lot of confidence in our guys, character of our players and these kids and our coaching staff and I haven't seen anything different for ten games," Brownell said. "Ten out of the 11 games, we've had some remarkable games and some remarkable wins. Been behind and came back and played teams that looked three times bigger than us. Played teams that had really good NBA prospects -- we've figured out ways to fight through it.

"I'm confident this team is going to battle back and going to be fine. Today we didn't have it. We got humbled by a really good team. A really well-coached team. An experienced team and a team that I said these guys are figuring it out...I have a lot of confidence that we'll get this figured out."