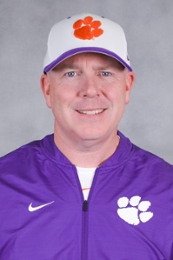 B I O
Kyle Jamieson, who previously served as head coach at Furman University, of Clemson Softball on Dec. 4, 2017. Jamieson primarily works with the Tigers’ pitchers, but also contributes with offense, defense and recruiting.


In its inaugural season, Jamieson helped transcend Clemson into a nationally-respected program. Jamieson helped Clemson, which was predicted to finish in 10th in the conference, according to the 2020 ACC preseason poll, to a 19-8 overall record, including 5-1 in ACC play. The Tigers, who won both of their ACC series against Virginia and Pitt, won 11 of their final 12 games before the 2020 season was cut short due to the coronavirus pandemic (COVID-19). After winning its first two ACC series, the National Fastpitch Coaches Association (NFCA) announced the first-year program received votes (10) in the fifth edition (March 3) of the 2020 USA Today/NFCA D1 Top 25 Coaches Poll. The announcement came after Clemson defeated then-No. 14 Georgia, 4-1, on Feb. 26 at Clemson Softball Stadium before sweeping the Cavaliers to win its first-ever ACC series. Under the direction of Jamieson, freshman right-hander Valerie Cagle was one of two freshmen in the ACC in 2020 to garner nine wins, which tied for fourth in the ACC among all players. Cagle was also third in the league in innings pitched (89.2), strikeouts (87), appearances (19) and games started (13), and tied for third in complete games (eight) before the Tigers’ inaugural season was cut short. Logan Caymol, also a freshman righty under the wing of Jamieson, was named the ACC Pitcher of the Week (Feb. 18, 2020) after throwing a complete game no-hitter against Western Carolina in what was the Tigers’ first win inside Clemson Softball Stadium.


In the summer of 2017, Jamieson joined the USA Softball staff and helped the Americans claim goal at the WBSC Softball World Championship in Surrey, British Columbia. He was a part of the U.S. National Team staff for the World Cup of Softball and also participated in several training camps with the program during 2016.


Jamieson took the reins of the Paladin softball program after serving as assistant coach at Fordham University during the 2011 season where he helped guide the Rams to a 32-26 overall record, 14-6 league mark, second place finish in the Atlantic 10 Conference and an 8-5 victory over eventual national champion Alabama in the regular season finale.  Under Jamieson’s guidance, the Rams paced the Atlantic 10 with 54 home runs and ranked second in the league in runs scored (236), doubles (63) and walks (169).


Jamieson’s pitching staff at Fordham posted a 2.35 ERA, ranked second in the Atlantic 10 with 466 strikeouts and issued a league-low 84 walks last season. The Rams placed five players on the All-Atlantic 10 First Team, including pitcher Jen Mineau, who fashioned a league-best 1.62 ERA under Jamieson’s tutelage and earned third team Capital One Academic All-America honors.


Prior to joining the coaching staff at Fordham in the fall of 2011, Jamieson spent two seasons helping to rebuild the University of Arkansas softball program.  In his first season in Fayetteville, he helped the Razorbacks lower the team ERA from 4.75 the previous season to 3.67 in 2010.


Jamieson, 41, grew up playing men’s fast pitch softball and helped pitch the Canadian National Team to the 1993 World Championship in Auckland, New Zealand. He was named the Male Gold Card Athlete of the Year by Softball Ontario in 1993, and was named one of Ontario’s Elite Athletes by that organization. The next year, he was inducted into the Goulbourn Township Sports Wall of Fame.  Jamieson was also a member of the 2003 Kemptville Thunder Fastpitch squad that claimed the silver medal at the ISC World Championships.