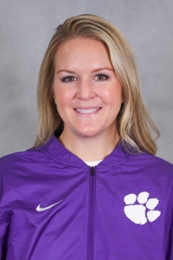 Director of Operations
B I O


Jeannie Murphy is in her first season as Director of Operations for Clemson softball. Head Coach John Rittman made the announcement on July 24, 2018, as he continues to build his staff for the program’s first pitch in February of 2020.


Murphy comes to Tigertown after spending the last three years at University of South Carolina Beaufort, where she served as an Eligibility and Compliance Officer and Athletic Academic Coordinator. In this role at USCB, Murphy oversaw all aspects of student-athlete recruiting, ensuring that all NAIA, conference and institutional rules were followed, and also determined and monitored eligibility for all Sand Shark student-athletes. She also oversaw study hall sessions and tutoring schedules for USCB student-athletes. During her last two years in Bluffton, Murphy also served as the head softball coach at May River High School.


Murphy was an assistant softball coach at Louisiana Tech in Ruston, La. from 2012-15, and prior to that, served in the same position at Northern Colorado from 2010-12. She was a graduate assistant coach at her alma mater, Oklahoma, for the 2009-10 season, where she was part of the Sooners’ 2010 Big 12 Conference championship title.


The native of Chandler, Okla. played at Oklahoma for four years, from 2006-09, when the team went to four-consecutive NCAA tournaments and was ranked in the top 20 in the final national rankings all four years. Murphy also won one Big 12 title with the Sooners as a player, in 2007.


Murphy earned an undergraduate degree in science from the University of Oklahoma in 2010. She earned a master’s degree in Athletic Administration and Coaching Athletic Leadership from Concordia University Irvine in Irvine, Calif. in 2014.