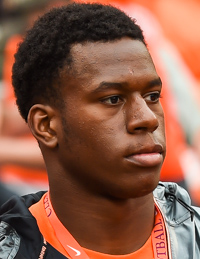 Middle Linebacker
B I O
Enrolled at Clemson in January of 2016…Under Armour All-American…named Defensive Player of the Year in state of Georgia by the Atlanta Constitution…Region Player of the Year as well…had 156 tackles, 17 tackles for loss, including 10 sacks, three passes broken up, one blocked kick, one interception and one touchdown as a senior at Roswell High in 2015, helping his team to a 14-0 record before losing in the state championship game…so his high school team had same record as Clemson in 2015…had nine tackles and a sack in state championship game…started his senior year strong with 18 tackles, three sacks and two fumble recoveries in the season opener…had 76 tackles in first five games of the 2015 season…had 78 tackles, 19 for losses, including one for a safety as a junior… had 67 tackles, four sacks, 25 tackles for loss and 8 pass break-ups in 2013… named to Super 11 Team in 2015 by the Atlanta Constitution, first player from Roswell High to be named…No. 89 player in the nation and No. 2 linebacker, and No. 9 player in Georgia by ESPN.com… No. 16 overall player and No. 2 linebacker in the nation and No. 4 player in Georgia by Rivals.com … No. 37 player by and No. 2 linebacker in the nation and No. 6 in Georgia by 247Sports.com… No. 48 player in the nation by Max Preps…also ranked as No 80 overall player in the nation by Tom Lemming… recruited by Brent Venables and Tony Elliot… his uncle, Anthony Butts played for Mississippi State and in the NFL…Tre wore No 57 in high school…chose Clemson over Alabama and Auburn….played his high school football for John Ford, a Clemson graduate….recruited by Brent Venables and Tony Elliott.

Mickey Plyler on Lamar: This is perhaps the most impressive physical specimen of this class. Lamar is a monster prospect that looks like an NFL guy right now. He has a great size, but the best attribute is his intelligence. Lamar is a really bright prospect. A great mind. I can see him making a run at a starting spot this spring.