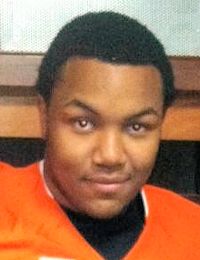 Defensive Tackle
B I O
Ranked as No. 109 best overall player in the nation by ESPN.com at the end of the 2014 season…also listed as fourth best player in the state of North Carolina and the 14th best defensive end in the nation by ESPN…played in the Under Armour All-American game in Florida just before coming to Clemson…helped his Cleveland High School team to a 10-3 record in 2014…came on the national radar as a junior when he had 78 tackles, but incredible 44 were tackles for loss…also had 7.5 sacks and blocked a pair of punts in a state playoff game…committed to Clemson on the same day (May 14, 2014) as classmate Zach Giella…enrolled at Clemson on Jan. 7, 2015.

Mickey Plyler on Johnson: "This is a high ceiling guy as well. Johnson is all about potential. The staff likes his upside because of his frame and his feet. There are opportunities at defensive tackle with the loss of three seniors, so Johnson will get a long look as an early enrollee this spring."

He is a raw talent since he has only been playing football for a few years but he is explosive and a very strong and physical force.