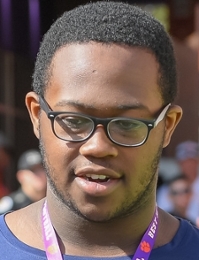 Played for Adam Clack at Milton High in Alpharetta, Ga. … played offensive line and defensive line as a senior … scored a touchdown and a two-point conversion last year … earned an Athlete of the Week selection by WSB-TV in Atlanta … finished with 113 pancake blocks as a junior when he helped Milton to a 13-2 record and the state championship for the first time in school history … as a junior, was a first-team all-state and all-region selection … North Georgia Lineman of the Year … a finalist for The Opening … Adidas All-American selection.

Committed to Clemson on Nov. 25, 2018 … recruited to Clemson by Mickey Conn and Robbie Caldwell … wore No. 57 in high school … last name pronounced TEE-oh … expected to enroll at Clemson in January 2020.