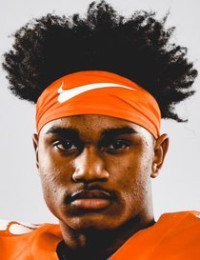 Four-star signee who originally committed to LSU … played on 5A state championship teams in Virginia as a sophomore and junior.

Played for Loren Johnson at Highland Springs High School in Virginia, the same program that produced Clemson All-ACC safety K’Von Wallace … helped Highland Springs to 11-1 record in 2019 … team ranked as the No. 3 overall team in Virginia by MaxPreps … team won its first 11 games then lost in the second round of the playoffs to end a 40-game winning streak … .ranked among the top 15 players in Virginia by the Daily Press prior to the 2019 season … had 63 tackles, three interceptions and two caused fumbles in 2018 when he helped his team to a state championship and a perfect season.