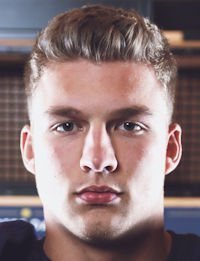 Linebacker
B I O
Talented four-star linebacker who ranked as the best player in Pennsylvania by some services … had strong 2018 season, leading his team to third straight Inter-AC Championship in a row … as a senior, had 106 tackles, 18 tackles for loss, five sacks and four interceptions … also had 313 yards rushing and 314 receiving on the offensive side of the ball … scored 14 total touchdowns … two-time conference MVP … named all-state in 2017, and the 2018 team was not yet announced at the time of his signing … No. 219 player in the nation by Rivals.com … that service also ranked McGuire as best player in Pennsylvania and 11th-best outside linebacker … seventh-best player in Pennsylvania by 247Sports … No. 26-best outside linebacker by PrepStar … led his conference in tackles as a junior … had a touchdown catch in 2017 that was the No. 2 play of the day on ESPN’s SportsCenter … played high school football at Malvern Prep for Dave Gueriera … very active in community service, he went on a 10-day trip to Dominican Republic in June to help build homes … also played on lacrosse team at Malvern … from same conference that produced Matt Ryan (Atlanta Falcons) and Mike McGlinchey (Notre Dame All-American) … Clemson recruiters were Brandon Streeter and Brent Venables … committed to Clemson on April 27, 2018 … .plans to enroll at Clemson in summer of 2019.