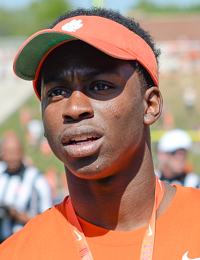 Cornerback
B I O
Member of the South Carolina Shrine Bowl team….helped Greenwood High to the state playoffs and a 9-6 record in 2014…ranked as the No. 166 player in the nation by 247 Sports entering his senior year….ranked as No. 11 player in South Carolina by 247 Sports…No. 27 cornerback in the nation by ESPN.com…had 80 tackles, four interceptions and 12 passes broken up as a junior at Greenwood High…had 45 tackles and four sacks as a sophomore….recruited by Mike Reed...committed to Clemson on April 12, 2014…signed financial aid agreement with Clemson on August 1, 2014…enrolled at Clemson on January 7, 2015.

Mickey Plyler on Chalmers: I saw Chalmers a bunch before his injury. He has very good cover skills and tackled well. I liked his instincts as well. He is a guy that is recovering from injury but he has a chance this spring. He comes across as a very competitive kid and will go a long way at this level.