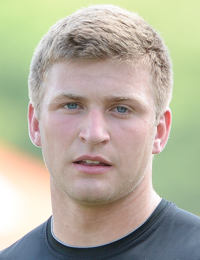 Tight End
B I O
Had solid senior year with 48 receptions for 545 yards and seven touchdowns… played in the Semper Fidelis All-American Bowl in California…first-team unanimous all-district choice as a junior and a senior…helped his team to 14-2 record and berth in state championship game …in 2014, he had 36 catches for 486 yards and seven touchdowns…team finished with 15-1 record and a berth in state championship game…in 2013, he had 7 catches for 90 yards…team finished 16-0 and won the state championship...finished his career with 91 catches for 1031 yards and 14 touchdowns first met Clemson Coach Dabo Swinney in the third grade when he was at a reunion for the 1992 Alabama National Championship team…also an outstanding basketball player, starter in the front court each of the last two years…as a junior helped team to state championship game on the hardwood…lost just one basketball game and one football game during the 2014-15 academic year…played his high school football for Todd Rodgers… grandson of former Alabama coach Gene Stallings, who coached Dabo Swinney at Alabama… Clemson tight ends coach Danny Pearman also coached under his grandfather….… narrowed his college choices to Clemson, Texas A&M, Texas and Mississippi…recruited by Danny Pearman.

Mickey Plyler on Chalk: I really like the tight ends at Clemson and Chalk fits right in. He has versatility that has been lacking at the position. I think he blocks well enough to make an early impact but is athletic enough to stay on the field and help in the passing game.